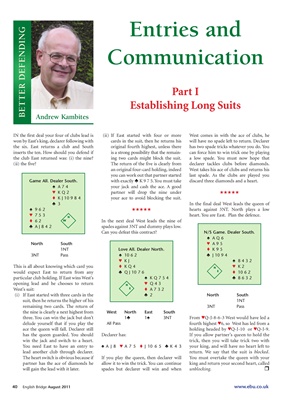 IN the first deal your four of clubs lead is (ii) If East started with four or more West comes in with the ace of clubs, he

won by East’s king, declarer following with cards in the suit, then he returns his will have no spade left to return. Declarer

the six. East returns a club and South original fourth highest, unless there has two spade tricks whatever you do. You

inserts the ten. How should you defend if is a strong possibility that the remain- can force him to win trick one by playing

the club East returned was: (i) the nine? ing two cards might block the suit. a low spade. You must now hope that

(ii) the five? The return of the five is clearly from declarer tackles clubs before diamonds.

an original four-card holding, indeed West takes his ace of clubs and returns his

you can work out that partner started last spade. As the clubs are played you

Game All. Dealer South. with exactly ® K 9 7 5. You must take discard three diamonds and a heart.

™ KQ2 partner will drop the nine under HHHHH

® 3 In the final deal West leads the queen of

heart. You are East. Plan the defence.

Can you defeat this contract? N/S Game. Dealer South.

opening lead and he chooses to return N ™ Q43

suit, then he returns the higher of his 1NT

delude yourself that if you play the All Pass fourth highest ™6, so West has led from a

has the queen guarded. You should Declarer has: If you allow partner’s queen to hold the

win the jack and switch to a heart. trick, then you will take trick two with

lead another club through declarer. return. We say that the suit is blocked.

The heart switch is obvious because if If you play the queen, then declarer will You must overtake the queen with your

partner has the ace of diamonds he allow it to win the trick. You can continue king and return your second heart, called

will gain the lead with it later. spades but declarer will win and when unblocking. r