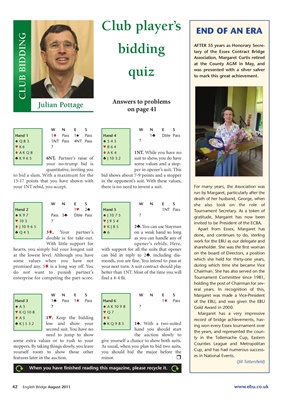 Club player’s END OF AN ERA

bidding AFTER 55 years as Honorary Secre-

tary of the Essex Contract Bridge

at the County AGM in May, and

quiz was presented with a silver salver

to mark this great achievement.

your no-trump bid is some values and a stop-

quantitative, inviting you per in opener’s suit. This

to bid a slam. With a maximum for the bid shows about 7-9 points and a stopper

15-17 points that you have shown with in the opponent’s suit. With these values,

your 1NT rebid, you accept. there is no need to invent a suit. For many years, the Association was

run by Margaret, particularly after the

death of her husband, George, when

invited to be President of the ECBA.

Apart from Essex, Margaret has

done, and continues to do, sterling

double is for take-out. as you can handle any of

work for the EBU as our delegate and

shareholder. She was the first woman

hearts, you simply bid your longest suit with support for all the suits that opener

at the lowest level. Although you have can bid in reply to 2®, including dia- on the board of Directors, a position

some values when you have not monds, you are fine. You intend to pass at which she held for thirty-one years,

promised any, 5t is a long way off. You your next turn. A suit contract should play during which time she became Vice

do not want to punish partner’s better than 1NT. Most of the time you will Chairman. She has also served on the

enterprise for competing the part-score. find a 4-4 fit. Tournament Committee since 1981,

eral years. In recognition of this,

tA5 1™. Keep the bidding tK record of bridge achievements, hav-

second suit. You have no hand you should start

the years, and represented the coun-

need to jump to show the auction slowly to

ty in the Tollemache Cup, Eastern

some extra values or to rush to your give yourself a chance to show both suits.

stoppers. By taking things slowly, you leave As usual, when you plan to bid two suits,

Cup, and has had numerous success-

When you have finished reading this magazine, please recycle it.