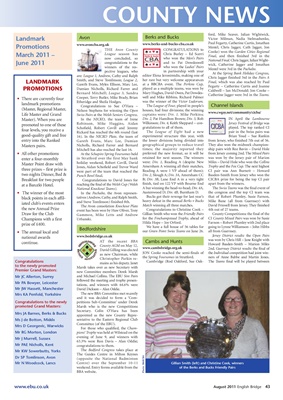 Promotions THE Avon County CONGRATULATIONS to

who won the Men’s Pairs

Final, and then finished 3rd in the

June 2011 congratulations to the and to Pat Dowdeswell

who won the Ladies’ Pairs

winners of the res- Mestel were 3rd in the Pachabo.

pective leagues, who in partnership with your

At the Spring Bank Holiday Congress,

are: League 1, Andrew, Cathy and Ralph editor Elena Jeronimidis, making one of

Chris Jagger finished 3rd in the Pairs A

Final, which was also reached by Paul

PROMOTIONS Damian Nicholls, Richard Farrer and played as a multiple teams, was won by

Catherine Jagger were 3rd in the Teams.

Etheridge and Sheila Hodges. was the winner of the Victor Ludorum.

Master). When you are In the NICKO, the team of Irene Div. 2, Pat Hamilton Brown; Div. 3, Rob IN April the Lambourne

promoted to one of these

Schofield, Robert Covill and Jeremy gratulations to all of them. played. The top ranked CI

four levels, you receive a Rickard has reached the 6th round (last The League of Eight had a new pair in the Swiss pairs was

good-quality gift and free 16). In the NICKO Plate, the team of experimental structure this year, with Brian Youd – Sue Rankin

entry into the Ranked Gareth Evans, Marc Lee, Damian the lower divisions being divided into from Jersey, who finished 7th out of 56.

• All other promotions At the Schapiro Spring Foursomes held

in Stratford over the first May bank

preferred the new format, so it will be

retained for next season. The winners

was won by the Jersey pair of Marion

Master Point draw with Amersham A winning all their matches, Trophy and the Fox Cup. The next highest

three prizes – first prize is were part of the team that reached the Reading A were 1 VP ahead of them); CI pair was Ann Burnett – Howard

Breakfast for two people Congratulations to David Jones for B; Div. 3B, Lane End A in a very tight CICBA prize for being the top CI pair

at a Barceló Hotel. reaching the final of the Welsh Cup (Welsh finish, tied on 122 VP with Bourne End apart from the winners.

National Knockout Teams). A but winning the head-to-head; Div. 4A, The Swiss Teams was the final event of

• The winner of the most In the Pachabo, the Avon represen-

Bucks got their revenge for last year’s

the congress and the top CI team was

that of Robert Plumley, Susie Farnon,

black points in each affil-

and Steve Tomlinson) finished 8th. heavy defeat in the annual Berks v Bucks Mike Bane (all from Guernsey) with

the new Annual Prize event has been won by Huw Oliver, Tony Congratulations to Christine Cook – 4th out of 27 teams.

Draw for the Club Gammon, Mike Letts and Andrew Gillian Smith who won the Friendly Pairs County Competitions: the final of the

Champions with a first Urbanski. for the Finchampstead Trophy, ahead of CI County Mixed Pairs was won by Susie

• The annual local and www.bedsbridge.co.uk

our Green Point Swiss Teams on June 26. all from Guernsey.

national awards was won by Chris Hill – Jane Knight with

as new Chairman, while JON Cooke reached the semi-finals of the Individual competition had joint win-

Christopher Parkin re - the Spring Foursomes in Stratford. ners of Anne Babbe and Martin Jones.

Congratulations mains as his deputy. Janet Cambridge (Rod Oakford, Sue Oak- The Teams final will be played between

to the newly promoted Marsh takes over as new Secretary with

followed the meeting and trophy presen-

Mr PA Bowyer, Leicester tations, and winners with 64.6% were

and it was decided to form a ‘Com-

Congratulations to the newly petitions Sub-Committee’ under Derek

promoted Grand Masters: Marsh who is the new Competitions

Secretary. Colin O’Hara has been

Committee (of the EBU).

For those who qualified, the Cham-

Mr RG Morton, London pions’ Trophy was held at Wilstead on the

Mr J Murrell, Sussex evening of June 9, and winners with

The Guides Centre in Milton Keynes

weekend. Entry forms available from the of the Berks and Bucks Friendly Pairs