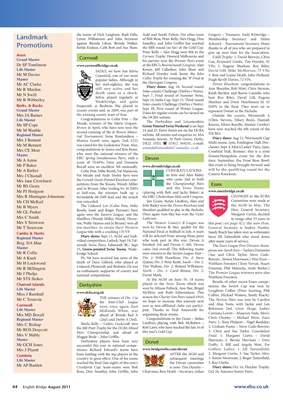 Promotions Robin Endean, Cath Bott and Sue Shaw. the fifth round (so far) of the Gold Cup. thanks to all of you who are prepared to

Peter Kelly – Alex Hogg were 8th in the give up your time for the Association.

Mr M Davies Copestick, one of our most Richard Horsley took home the John 3. Ron and Lynne Heath, John Holland,

Master popular ladies. Although in Colley Trophy for winning the ‘B’ Final at Hugh Kevill-Davies, 72 VPs.

Mr AC Clarke her mid-eighties, she was Dorset Knockout: congratulations to

death came as a shock. Keith Bartlett and Barrie Cantello who

Mr B Wibberley Wadebridge, and quite Sept 14, India Cup. Sept 15, Third round

Sheehan and Doris Hutchinson by 43

IMPS in the final. They went on to

Grand Master county events and, in 2009, was part of Sept 28, First round of Winter League.

represent Dorset in the Pachabo.

the winning county team of four. Dates for regular events can be viewed on

Mrs JA Barnes the DCBA website. Outside the county, Weymouth A

Meade, winners of the Marie Gregson- The Derbyshire and Leicestershire

Brown in April, who have now won the have now reached the 6th round of the

Mr M Wenble second running of the Jo Brown Memo- 24 and 25. Entry forms are on the DCBA

Regional Master website. All entries and enquiries to: Mrs NICKO.

Mr M Bennett was raised for the Leukaemia Trust. Also,

Mrs CE Moir Crosfield Hall, Romsey; this is a joint

Master who were the national winners of the

Dorset/Hampshire event for the first

Mr P Baker Boxall were an excellent 5th nationally. www.devonbridge.co.uk this event is being brought forward and

Mr A Barker Colin Pote, Mike Booth, Val Manicom, CONGRATULATIONS will be the qualifying round for the

petition, from the Keasts, Wendy Miller the Championship Pairs Essex

Mr BS Geary and Jo Bryant. After trailing by 10 IMPs and the Swiss Teams

Mr PJ Hodgson at half-way, the winners built up a (playing with Bob and Jacky Baker) at www.essexbridge.co.uk

Mr CH McKail was conceded. Jim Grant, Stefan Lindfors, Alan and Committee were made at

The Liskeard Lot (Colin Pote, Mike Jette Bailey won the Devon Knockout and the AGM in May. The

Booth, Janet and Roger Putnam) have therefore qualified to play in the Pachabo. Hon. General Secretary,

again won the Eastern League, and the

Mr T Strawson ten matches, to retain their Western won by Devon B; they qualify for the General Secretary is Audrey Hartley.

League title with a crushing 170 VP. National Final at Solihull in July. A team Sandy Riach has taken over as webmaster

Diary dates: Sept 11, AGM and Indi- will be selected from among those pairs from Jill Tattersfield who stood down

vidual competition, Ladock. Sept 18, Fal- who took part in this win. Devon A after many years of service.

Results of other recent Essex compe-

Channel Islands Derbyshire played in the Swiss Teams which was

titions: the Switch Cup was won by

McElroy and Ruth Edmondson. This

THE winners of Div. 1 in season the Charity Sim Pairs raised £910;

Cornwall year as non-affiliated clubs can partici- and Alan Veats, with Jackie and Len

were, once again, East

Mrs MD Boxall ahead of British Rail A

the Bill Pratt Trophy for the DCBA Mixed Rob Lawy, who have reached the last 16 of

Pairs Championship, just ahead of

been battling with the top players in the AFTER the AGM and 2. Margaret Curtis, 3. Sue Taylor; Men:

reached the final (last eight) of this year’s the Dorset committee 3. Ray Clarke.