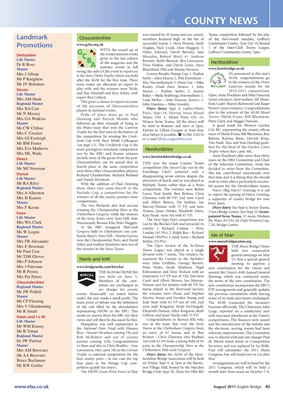 Landmark Gloucestershire members featured high in the list of of the first-round matches, Ledbury

WITH the round up of

Life Master given in the last edition

of the magazine and the

swing, the only GCBA event to report on

is the Steve Darke Trophy which was held

after the AGM for the first time. Three

Mac Nurmohamed; 3. Owen Lee – Mike to the winners of the Victor

Mr JV Robshaw team mates are allocated an expert to

Devon play with and the winners were Nicky

Life Master and Ray Mitchell and Eira Arkley with

This gives a chance to report on some

of the successes of Gloucestershire

Pride of place must go to Paul

Wessex Swiss Teams. All the above will Peter Clark and Maggie Dawson.

Master followed up their triumph of being in

be held in Romsey and start at 2pm. A good result for Welwyn Garden

Mr CW Clifton the Wales team that won the Camrose

Entries to Lillian Craigen at least four City BC, representing the county, whose

fords Cup with their Welsh Colleagues

(see page 13). The Crockfords Cup is the

Mrs Eve Mathews fied for the final of the Garden Cities

most prestigious knockout competition Herefordshire Trophy where they came 4th.

Mrs ML Wade run by the EBU and former winners

Anne Flockhart: after more than thirty

include most of the greats from the past. www.herefordshirebridge.co.uk

Direct years on the HBA Committee and Chair

Life Master Gloucestershire can be proud that in THIS year the major County Teams of the Selection Committee, Anne has

Mr MJ Newman decided to retire from the Committee.

were three other Gloucestershire players: Fownhope Club) achieved only a

Dorset She has contributed enormously over

Life Master that time and it is fitting that she should

and Daniel McIntosh. attraction of lunch, and so was played as wish to retire after a particularly success-

Mr RA Riley With the addition of Paul Denning Multiple Teams rather than as a Swiss ful season for the Hertfordshire teams.

Regional Master these three also came fourth in the competition. The winners were Robin Harry (Big Harry) Goreing: it is sad

Mrs A Allerston Pachabo Cup, a competition for the Lewis, Paul Smith, Ben Britton, Chris to report the passing of Harry Goreing,

Mrs H Kearns winners of all the county premier team Chowney with 89 VP; 2nd were Carol a supporter of county bridge for over

The two Richards also had success Murray-Watson with 71 VP, and June

Cheltenham Congress, while the winners Kate Neale were 3rd with 67 VP.

the winners in the Swiss Teams. Teams League was played as a single held two consecutive

division with 7 teams. The winners (to general meetings on May

Hants and IoW represent the County in the Pachabo) 15: first a special general

were John Griffiths, George Barrett, meeting to approve a

Mr R Perera THE AGM for HIOWCBA Edmondson and Tony Truluck with an second, the Union’s 44th Annual General

Mrs Pat Peters was held on June 5. impressive 115 VP out of 120; 2nd were Meeting, which was conducted under

Members of the com- Carol and Albert Brown, Ian Murray- the terms of the new constitution. The

mittee are unchanged as Watson and Pat Jenkins with 80 VP. Six new constitution incorporates the EBU’s

are charges for county teams played in the Restricted Section; P2P arrangements and generally updates

Mr JW Polhill events. Financially (as stated before the winners were Diana and Stephen the previous constitution while leaving

Master audit) the year made a small profit. The Martin, Susan and Gordon Young and many of its main provisions unchanged.

Mr CP Fleming main point of debate was the definition Jody Stott with 92 VP out of 100; 2nd The AGM transacted the necessary

Mrs V Glendenning of the role filled by the shareholders were Judy Kingston, Heidi McDougall, business efficiently. The Chairman, John

Hants and I.o.W. awaits an answer from the EBU for their Gibbon and Janet Hardy with 73 VP. with increased attendances at the Union’s

Life Master views and will then be discussed further. Congratulations to Roman Klis who competitions. The finances were sound

Mr B Tobutt Rice – Stewart Strachan coming 7th, and an entry of 67 teams, and to Ben welcome improvements. The Committee

Regional Master Bob McRobert and out of county Britton – Chris Chowney who finished was re-elected with just one change: Paul

Dr JW Parlour partner coming 12th. Congratulations 3rd with 61.3% from a strong field of 92 de Weerd stood down as Competition

Master to them and also to Chris Bradley – Guy pairs in the Championship Pairs at the Secretary and was replaced by Liz Kelly.

Mrs AM Brewster Lawrenson, who came 7th in the Corwen Cheltenham Mid-week Congress. Paul will administer the 2011 Manx

Mr AA Brewster Trophy (a national competition for the Diary dates: the AGM of the Here- Congress, but will hand over to Liz after

best county pairs – in our case the top fordshire Bridge Association will be held that.

four pairs in the Pottage Cup com- on Friday, Sept 9, at 7pm at the Bartes- Arrangements are well in hand for the

Mr KW Goldie petition qualify for entry). tree Village Hall, hosted by the Marches 2011 Congress, which will be held a

The HIOW Green Point Event in May Bridge Club. Sept 30, Draw for HBA KO month later than usual on October 7-9.