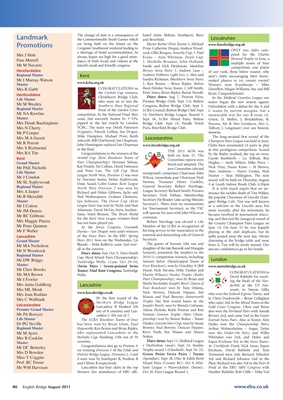 The change of date is a consequence of liated clubs: Bolton, Southport, Bury

Landmark the Commonwealth Youth Games which and Brierfield. Lincolnshire

are being held on the Island on the Hector Barker Pivot Teams: 1. Michael

dance of both locals and visitors at the 1. Michelle Brunner, John Holland, multiple teams of four

Herefordshire Berney Swiss Pairs: 1. Andrew Lum – of any rank, three below master; why

who went on to win the Preston Bridge Club. Sept 2-4, Bolton teams began the new season against

Mr M Westley Southern Heat Regional Congress, Bolton Bridge Club. Sept 5, Oxfordshire with a defeat for the A and

Mr NA Rawlins competition. In the National Final, they 10, Northern Bridge League, Round 3. memorable win for our B team (A.

Mike Hampton, Michael Prior, Keith The long-awaited first round of the

Mrs S Richmond in the final. in this prestigious competition. Scored

Mrs RA Tite Congratulations to the winners of the by the Butler method, the top six were:

heard and adopted. The

round will be held on Thursday, August

It is with much regret that we an-

the popular Chairman of Lincoln (East-

League East) was won by Nicky and Stan Secretary). There were no nominations

Mr I Cotton as a solicitor in the Lincoln area, but

Adamson, David McVey, Steve Auchter- for Tournament Secretary, so the TSC more recently, after his retirement, he

Mr JM Dennis will operate for now with John Wilcox as

for the Kent Area League winners final ing, and directed the inaugural round of

Mrs Maggie Piazza has not been played yet. Robert Northage was elected a Life the County Champion Pairs League on

Mr Peter Quinton At the Jersey Congress, Gwyneth Member of the LCBA in recognition of June 14. On June 15 he was happily

Mr F Waller Davies – Ian Draper were joint winners his long service to the Association in the playing at the club duplicate, but he

Lancashire of the Swiss Pairs. In the EBU Spring essential and demanding role of General sadly passed away the next day. Always

Grand Master Pairs 2011 Sims on the Wednesday, Liz Secretary. charming at the bridge table and away

Blande – Mike Rafferty came 2nd over- The guests of honour (the son and from it, Tim will be sorely missed. Our

all in the country. daughter of the late Ramnik and Mangala sincere condolences go to his family.

Mr N Woodcock Samani), presented the trophies to the

Mr I Fowler Pairs Championship), won by Brian and ing the finals of the Van-

derbilt at the US Nat-

Mr M Ayers who represented Lancashire in the Kerri Nash, Jim Mason and Simon won the Under-19s Pairs, and Willie

Mrs B Cooklin Pachabo Cup, finishing 15th out of 30 Stokes. Whittaker was 2nd, and Helen and

on winning Division 1 of the Fylde and Erichsen, David Bakhshi and Tom

Miss Y Coggins 4 were won by Southport B, Poulton B (Spondon). Sept 28, Otto & Edith Bowl 3rd and Richard Johnson 2nd in the

Prof. RC Fraser and Clifton B respectively. Mixed Pairs (County BC). Oct 9, Mid- Plate. Richard was also 3rd in the Pairs B