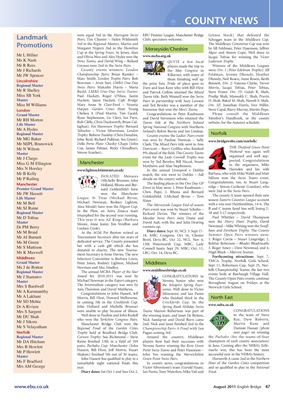 3rd in the Regional Masters, Martin and The Middlesex Committee Cup was won

Cup at the Spring Fours. In Jersey, Alan Alper and Simon Cope. Well done to

Mr R Rees Gronau were 2nd in the Swiss Pairs. players made the trip to Winners of the Middlesex Leagues

Simon Scanlan). 9% ahead of the field. The County Teams Weekend was again well

event for the Lady Connell Trophy was organised and well sup-

Mr B Kelly match, the win went to Dublin – full Barbara, who with Mike Walsh and Matt

The leading places in the One Day GP Congratulations, too, to Stuart Lang-

Event in May were: 1. Peter Kaufmann – ridge – Simon Cochemé (London), who

Chris Pope; 2. Rhona and Bernard were 2nd in the Swiss Pairs.

Mr M Bell The Merseyside League End-of-season with a win over Hertfordshire, 14-6. The

In the Plate, an Astra Zeneca team Pairs event was won by Stuart Scholes –

Regional Master Richard Davies. The winners of the 18 and 3-17 respectively.

triumphed for the second year running.

This year it was AZ Kings (Barbara

Mr M Braid At the AGM Pat Buxton retired as

Mr S Mattison her with a cash gift which she has

donated to charity. The new Tourna-

Regional Master The annual MCBA Player of the Year www.middlesexbridge.co.uk

events both at Bawburgh Village Hall.

throughout August on Fridays at the

Mrs S Sargent were unable to play because of illness. Teams Marion Robertson was part of CONGRATULATIONS

Well done to Pauline and John Rudolf the winning team, and Janet De Botton, to the team of Steve

Regional Master Corwen Trophy: Sue Richmond – Steve Around the country, Middlesex the Pachabo (for the teams-of-four

Hassett, Bill Hirst, Jeff Morris, Stuart Point Swiss Teams and Peter Hasenson – mache win, this has been the most

John Hassett has qualified to play in a Green Point Swiss Pairs. Hurworth A came 2nd in the Northern

Mrs AM George year. Victor Silverstone’s team (Gerald Haase, and so qualified to play in the National