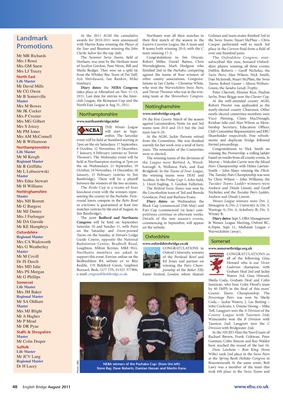 Landmark awards for 2010-2011 were announced their first match of the season in the the Swiss Teams. Stuart McPhee – Chris

with Martin Kane winning the Player of Eastern Counties League, the A team and Cooper performed well to reach 3rd

Promotions the Year and Brunton winning the John B teams both winning 20-0, with the C place in the Corwen final from a field of

Clarke Salver for the top club. team winning 17-3. over one hundred pairs.

from the Whitley Bay Team of Pat Tuff, against the teams of four winners of Swiss Pairs; Alan Wilson, Nick Smith,

Mr CG Owen takes place at Allensford on Nov 11-13, and Trevor Thrower who was in the win- Peter Cherrett, Eleanor Rice, Pauline

Mr B Somerville 2011. Last date for entries to the Inter- ning team at the Shrewsbury Congress. Serby, Peter Briggs won the Chester Cup.

Master club League, the Kempson Cup and the At the well-attended county AGM,

IN the first County Match of the season

against Leicestershire, Notts 1st and 3rd Krishan Jalie and Alan Wilson as Mem-

Mr R Williamson event will be held at Stamford starting at from the Committee. She was thanked ments and duplicate bridge followed

7pm on the six Saturdays: 17 September, warmly for her work over a total of forty formal proceedings.

years. The remainder of the Committee

Mr M Keogh Thrower). The Wednesday event will be The winning teams of the divisions of based on results from all county events. Jo

Regional Master held at Northampton starting at 7pm on the League were Retford A, Wood - Murray – Malcolm Currie won the Mixed

Master January, 15 February (entries to Jim the winning teams were DJAT and The Tuesday Pairs Championship was won

Bainbridge). There will be a playoff Acolites. In the Priday Cup: 1. John Auld, by Chris Wilson – John Williams; the

Mr H Williams The Broke Cup is a teams-of-four The Retford Swiss Teams was won by Andrew and Dinah Lintott, and Geoff

Nottinghamshire knockout event with the winners repre- the Lincolnshire team of Ted and Brenda Nicholas; and the Tuesday Pairs Ladder,

Mrs NH Borrett round losers compete in the Betts Bowl Diary dates: on Wednesdays the Wessex League winners were: Div. 1,

Mr G Burgess so everyone is guaranteed at least two Black Cup (commenced 25th May) and Menagerie A; Div. 2, University A; Div. 3,

Mr DA Garside Congress will be held on September commencing in September, will appear & Wessex League Meeting, Oxford BC,

Oxfordshire on the Saturday and Green-pointed Warwickshire (away).

Teams on the Sunday, at Heron’s Lodge

Guide Centre, opposite the National

Mr M Covill support this event. Entries: online on the of the Portland Bowl and all of the following: Gina

Life Master by 40 IMPS in the final of this years’

Mrs MJ Blight Toft. Langport won the A Division of the

Winscombe won the B Division with

Staffs & Shropshire In the NICKO Plate the Yeovil team of

Suffolk have reached the round of the last 16.

Mr JCV Lang at the Spring Bank Holiday Congress in

NEBA winners of the Pachabo Cup: (from the left) Bournemouth At the same event, Rob

Dr H Lacey Steve Ray, Dave Roberts, Damian Hassan and Martin Kane. Lawy was a member of the team that

took 6th place in the Swiss Teams and