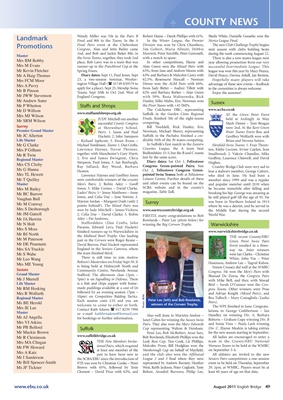 Wendy Miller was 5th in the Pairs B Robert Hume – Derek Phillips with 61%. Sheila White, Danielle Gosselin won the

Landmark Final and 8th in the Teams. In the A In the Winter League, the Premier Novice League Final.

the Swiss Teams, together, they took 2nd with a match to spare. There is also a new teams league next

Mrs BM Bobby place. Rob Lawy was in a team that was In other competitions, Elaine and year allowing promotion from our very

Mrs M Evans runner-up in the Punchbowl Cup at the Alan Green won the Mixed Pairs with successful Intermediate League. This

Mr Kevin Fletcher Spring Fours. 65%, from Jane and Andrew Moore with league was won this year by Mary Pearce,

apply for a place). Sept 25, Mendip Swiss from Judy Birley – Audrey Tillett with to the committee is always welcome.

the Pivot Teams with +43 IMPs.

www.staffsandshrops.org.uk Suffolk in the Garden Cities Regional AT the Green Point Event

JUDY Mitchell ran another Finals, finished 5th of the eight-teams held at Ardingly in May

together with Manchester’s Gary Hyett; Bedfordshire 15-5, but the B and C teams Smallwood; 2. Valerie Chandler, Mike

Mrs TL Hewett Lawrence Haynes and Geoffrey Jones pointed Swiss Teams; both at Felixstowe who died in June. He had been a

Mr T Quilley were comfortable winners of the county Leisure Centre. Further details of these member since 1999 and was a regular

Master Men’s Pairs; 2. Robin Adey – Geoff and other events can be found on the and popular member until 2010 when

Mrs M Bailey Jones; 3. Mike Cornes – David Clarke. SCBA website and in the county’s he became immobile after falling and

Ms M Conway points behind!). The Mixed Pairs was where he was a dentist, and he served in

finished runners-up to Warwickshire in www.warwickshirebridge.co.uk

Mr J Murrell 5pm) is on Signalling in Defence. There with Mike Bell, and they, with Sinead

Mr RM Hosking made puddings available at a cost of £6 gress Teams. Other winners were Prue

Each session costs £10 and you are Peter Lee (left) and Bob Rowlands,

welcome to come to either or both. winners of the Corwen Trophy.

tional Pairs, which required Malcolm Pryor, Bill Hodgkiss won the Womens Teams to be held at the WMBC

at least one member of the Wanborough Cup on behalf of Mayfield, on September 3-4.

Mr I Sanderson the SCBA/EBU since the introduction of League 2 and 3 final where they were Seniors Pairs competition: a one-session