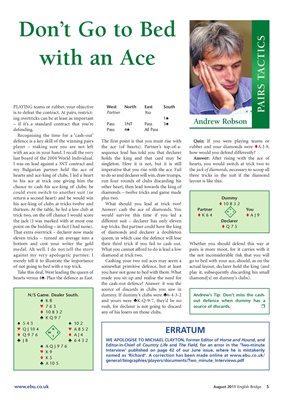 is to defeat the contract. At pairs, restrict- Partner You

ing overtricks can be at least as important 1´

Recognising the time for a ‘cash-out’

defence is a key skill of the winning pairs The first point is that you must rise with Quiz: If you were playing teams or

player – making sure you are not left the ace (of hearts). Partner’s top-of-a- rubber and your diamonds were tA-J-9,

with an ace in your hand. I recall the very sequence lead has told you that declarer how would you defend differently?

last board of the 2004 World Individual. holds the king and that card may be Answer: After rising with the ace of

I was on lead against a 3NT contract and singleton. Here it is not, but it is still hearts, you would switch at trick two to

my Bulgarian partner held the ace of imperative that you rise with the ace. Fail the jack of diamonds, necessary to scoop all

hearts and ace-king of clubs. I led a heart to do so and declarer will win, draw trumps, three tricks in the suit if the diamond

to his ace at trick one giving him the run four rounds of clubs discarding his layout is like this:

chance to cash his ace-king of clubs; he other heart, then lead towards the king of

return a second heart) and he would win plus two. Dummy

his ace-king of clubs at tricks twelve and What should you lead at trick two? t 10 8 3 2

thirteen. At the table, he led a low club at Answer: cash the ace of diamonds. You Partner W

trick two, on the off chance I would score would survive this time if you led a tK64 S

point on the bidding – in fact I had none). top tricks. But partner could have the king tQ75

eleven tricks – turned an average into a queen, in which case the defence will lose

bottom and cost your writer the gold their third trick if you fail to cash out. Whether you should defend this way at

medal. Ah well. I do not tell the story What you cannot afford to do is lead a low pairs is more moot, for it carries with it

against my very apologetic partner. I diamond at trick two. the not inconsiderable risk that you will

merely tell it to illustrate the importance Cashing your two red aces may seem a go to bed with your ace, should, as on the

of not going to bed with a top trick. somewhat primitive defence, but at least actual layout, declarer hold the king (and

Take this deal, West leading the queen of you have not gone to bed with them. What play it, subsequently discarding his small

hearts versus 4´. Plan the defence as East. made you sit up and realise the need for diamond[s] on dummy’s clubs).

the cash-out defence? Answer: it was the

source of discards in clubs you saw in

™ 763 rush, for declarer is not going to discard source of discards. r

® J8 ® 6432 WE APOLOGISE TO MICHAEL CLAYTON, former Editor of Horse and Hound, and

´ AQJ976 Editor-in-Chief of Country Life and The Field, for an error in the ‘Two-minute

™ K9 Interview’ published on page 42 of our June issue, where he is mistakenly

named as ‘Richard’. A correction has been made online at www.ebu.co.uk/