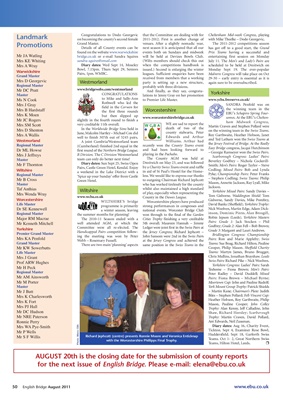 Congratulations to Dodo Georgevic that the Committee are dealing with for Cheltenham Mid-week Congress, playing

Landmark on becoming the county’s second female 2011-2012. First is another change of with Mike Theelke – Dodo Georgevic.

Promotions Details of all County events can be next season it is anticipated that all our has got off to a good start, the Grand

found on the website www.warwickshire events both on Sundays and midweek Prix Teams having a successful and

Mrs KE Whiting sandra-squires@email.com (Wilts members should check this out July 11. The Men’s and Lady’s Pairs are

Mrs A Wray Diary dates: Wed Sept 14, Moseley when the competitions handbook is scheduled to be held at Droitwich on

Mrs D Georgevic Westmorland party is setting up a new structure, again sure to be oversubscribed.

Mr DC Pratt www.bridgewebs.com/westmorland And finally, as they say, congratu-

Master CONGRATULATIONS lations to Jenny Gray on her promotion

Rothwell who led the SANDRA Penfold was on

Mrs J Gray field in the Corwen for

Mrs B Hardstaff Worcestershire the winning team in the

Mrs K Moen but then slipped up www.worcestershirebridge.co.uk somes. At the EBU’s Chelten-

Mr JC Rogers slightly in the fourth round to finish a ham Midweek Congress,

Mrs SM Scott very creditable 11th overall. WE are sad to report the

death of two of the Martin Craven and Stephen Pollard were

Mrs D Shenton In the Worldwide Bridge Sims held in on the winning team in the Swiss Teams.

Westmorland Williams. Arthur had and Ted Latham won the Swiss Teams at

A joint Cumbria/Westmorland team the Jersey Festival of Bridge. At the Really

and had been looking forward to Easy Bridge congress, Jacqui Hutchinson

Dr ML Howse first round of the Northern Bridge League,

Mrs J Jeffreys B Division. The C Division Westmorland playing in the Pachabo.

The County AGM was held at Scarborough Congress: Ladies’ Pairs:

Master team can only do better next time!

Droitwich on May 23, and was followed Beverley Godfrey – Nichola Cockerill-

Wiltshire in aid of St Paul’s Hostel for the Home- Codling; Mixed Pairs: Bob and Lynda

a weekend in the Lake District with a

Regional Master less. We would like to express our thanks Pyke; Championship Pairs: Peter Franks

‘Spice up your Sunday’ offer from Castle

Mrs Wenda Wray of play, especially when representing the

Regional Master the summer months for planning! won through to the final of the Garden inson, Dominic Pinto, Alan Brosgill,

Committee were all re-elected. The Ledger were joint first in the Swiss Pairs at Godfrey; Grade 2: Alan Fell – Bob Brown;

ing the meeting was won by Peter John Sansom were 2nd in the Swiss Pairs Bridlington Congress: Championship

with the Worcestershire Phillipps Final Trophy.

for the next issue of English Bridge. Please e-mail: elena@ebu.co.uk