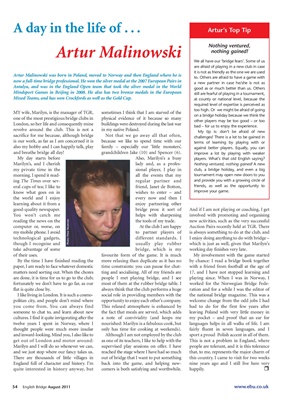 We all have our ‘bridge fears’. Some of us

are afraid of playing in a new club in case

it is not as friendly as the one we are used

Artur Malinowski was born in Poland, moved to Norway and then England where he is to. Others are afraid to have a game with

now a full-time bridge professional. He won the silver medal at the 2007 European Pairs in a new partner in case he/she is not as

Antalya, and was in the England Open team that took the silver medal in the World good as or much better than us. Others

Mindsport Games in Beijing in 2008. He also has two bronze medals in the European still are fearful of playing in a tournament,

Mixed Teams, and has won Crockfords as well as the Gold Cup. at county or national level, because the

required level of expertise is perceived as

too high. Or we might be afraid of going

MY wife, Marilyn, is the manager of TGR, sometimes I think that I am starved of the

on a bridge holiday because we think the

other players may be too good – or too

London, so her life and consequently mine buildings were destroyed during the last war bad – for us to enjoy the experience.

revolve around the club. This is not a in my native Poland. My tip is: don’t be afraid of new

sacrifice for me because, although bridge Not that we go away all that often, challenges! There is a lot to be gained in

is our work, as far as I am concerned it is because we like to spend time with our terms of learning by playing with or

also my hobby and I can happily talk, play family – especially our ‘little monsters’, against better players. Equally, you can

and breathe bridge all day! grandchildren Jake (10) and Spencer (6). improve a lot by playing with weaker

Marilyn’s, and I cherish lady and, as a profes- Nothing ventured, nothing gained! A new

my private time in the sional player, I play in club, a bridge holiday, and even a big

morning. I spend it read- all the events that my tournament may open new doors to you

eral cups of tea; I like to friend, Janet de Botton, friends, as well as the opportunity to

know what goes on in wishes to enter – and improve your game.

the world and I enjoy every now and then I

learning about it from a enjoy partnering other

good-quality newspaper. bridge pros: it sort of And if I am not playing or coaching, I get

reading the news on the the tools of my trade. new activities, such as the very successful

computer or, worse, on At the club I am happy Auction Pairs recently held at TGR. There

my mobile phone. I avoid to partner players of is always something to do at the club, and

technological gad gets, different standards. I I enjoy doing anything to do with bridge –

though I recognise and usu ally play rubber which is just as well, given that Marilyn’s

take advantage of some bridge, which is my working day finishes very late.

of their uses. favourite form of the game. It is much My involvement with the game started

By the time I have finished reading the more relaxing than duplicate as it has no by chance: I read a bridge book together

paper, I am ready to face whatever domestic time constraints: you can pause for chat- with a friend from football at the age of

matters need sorting out. When the chores ting and socialising. All of my friends are 17, and I have not stopped learning and

are done, it is time for us to go to the club; people I met playing bridge, and I see playing since. When I was in Norway, I

fortunately we don’t have to go far, as our most of them at the rubber bridge table. I worked for the Norwegian Bridge Fede-

flat is quite close by. always think that the club performs a huge ration and for a while I was the editor of

I like living in London. It is such a cosmo- social role in providing members with the the national bridge magazine. This was a

politan city, and people don’t mind where opportunity to enjoy each other’s company. welcome change from the odd jobs I had

you come from. You can always find This relaxed atmosphere is enhanced by had to do for the first few years after

someone to chat to, and learn about new the fact that meals are served, which adds leaving Poland with very little money in

cultures. I find it quite invigorating after the a note of conviviality (and keeps me my pocket – and proof that an ear for

twelve years I spent in Norway, where I nourished: Marilyn is a fabulous cook, but languages helps in all walks of life. I am

thought people were much more insular only has time for cooking at weekends). fairly fluent in seven languages, and I

and inward-looking. Mind you, I also like to Although I am not employed by the club sport a proud Polish accent in all of them.

get out of London and motor around: as one of its teachers, I like to help with the This is not a problem in England, where

Marilyn and I will do so whenever we can, supervised play sessions on offer. I have people are tolerant, and it is this tolerance

and we just stop where our fancy takes us. reached the stage where I have had so much that, to me, represents the major charm of

There are thousands of little villages in out of bridge that I want to put something this country. I came to visit for two weeks

England full of character and history. I’m back into the game, and helping new- nine years ago and I still live here very

quite interested in history anyway, but comers is both satisfying and worthwhile. happily. r