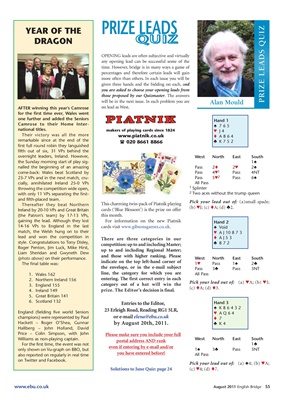 any opening lead can be successful some of the

time. However, bridge is in many ways a game of

more often than others. In each issue you will be

given three hands and the bidding on each, and

you are asked to choose your opening leads from

those proposed by our Quizmaster. The answers

will be in the next issue. In each problem you are Alan Mould

AFTER winning this year’s Camrose on lead as West.

for the first time ever, Wales went

one further and added the Seniors Hand 1

Their victory was all the more www.piatnik.co.uk t A864

first full round robin they languished

fifth out of six, 31 VPs behind the

nalled the beginning of an amazing Pass 2t 2™ 2´

2 Two aces without the trump queen

with only 11 VPs separating the first-

This charming twin-pack of Piatnik playing Pick your lead out of: (a)small spade;

Ireland by 20-10 VPs and Great Britain

gaining the lead. Although they lost For information on the new Piatnik Hand 2

14-16 VPs to England in the last cards visit www.gibsonsgames.co.uk. ´ Void

competition: up to and including Master;

up to and including Regional Master;

and those with higher ranking. Please West North East South

(photo above) on their performance.

The final table was: indicate on the top left-hand corner of 1™ Pass 1´ 2®

the envelope, or in the e-mail subject Pass 3® Pass 3NT

1. Wales 162 line, the category for which you are All Pass

2. Northern Ireland 156 entering. The first correct entry in each

Entries to the Editor,

champions) were represented by Paul or e-mail elena@ebu.co.uk t 7

Price – Colin Simpson, with John Please make sure you include your full

For the first time, the event was not 1®

only shown on Vu-graph on BBO, but

also reported on regularly in real time you have entered before! All Pass