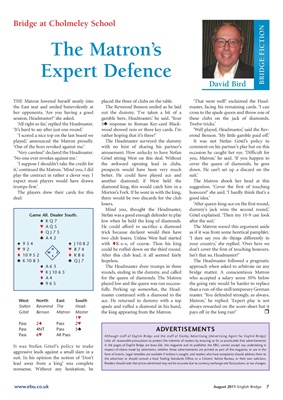 THE Matron lowered herself neatly into placed the three of clubs on the table. ‘That went well!’ exclaimed the Head-

the East seat and smiled benevolently at The Reverend Benson smiled as he laid master, facing his remaining cards. ‘I can

her opponents. ‘Are you having a good out the dummy. ‘I’ve taken a bit of a cross to the spade queen and throw one of

session, Headmaster?’ she asked. gamble here, Headmaster,’ he said. ‘Your these clubs on the jack of diamonds.

‘I scored a nice top on the last board we rather hoping that it’s three!’ erend Benson. ‘My little gamble paid off.’

played,’ announced the Matron proudly. The Headmaster surveyed the dummy It was not Stefan Götel’s policy to

‘Very careless!’ declared the Headmaster. amusement. How unlucky to have Stefan occasion he caught her eye. ‘Difficult for

‘No-one ever revokes against me.’ Götel sitting West on this deal. Without you, Matron,’ he said. ‘If you happen to

‘I suppose I shouldn’t take the credit for the awkward opening lead in clubs, cover the queen of diamonds, he goes

it,’ continued the Matron. ‘Mind you, I did prospects would have been very much down. He can’t set up a discard on the

play the contract in rather a clever way. I better. He could have played ace and suit.’

expect most players would have drawn another diamond; if West held the The Matron shook her head at this

trumps first.’ diamond king, this would catch him in a suggestion. ‘Cover the first of touching

The players drew their cards for this Morton’s Fork. If he went in with the king, honours?’ she said. ‘I hardly think that’s a

deal: there would be two discards for the club good idea.’

losers. ‘After queen-king-ace on the first round,

Mind you, thought the Headmaster, dummy’s jack wins the second round,’

Game All. Dealer South. Stefan was a good enough defender to play Götel explained. ‘Then my 10-9 can look

´ KQ7 low when he held the king of diamonds. after the suit.’

t QJ73 trick because declarer would then have as if it was from some heretical pamphlet.

® A42 two club losers. Unless West had started ‘I dare say you do things differently in

t A4 for the queen of diamonds. The Matron who accepted a salary some 30% below

fully. Perking up somewhat, the Head- than a run-of-the-mill temporary German

master continued with a diamond to the master. ‘You defended strongly, as always,

West North East South ace. He returned to dummy with a top Matron,’ he replied. ‘Expert play is not

Stefan Reverend The Head- spade and ruffed a diamond in his hand, always rewarded on the score-sheet but it

Götel Benson Matron Master the king appearing from the Matron. pays off in the long run!’ r

It was Stefan Götel’s policy to make in the pages of English Bridge are bona fide, the magazine and its publisher, the EBU, cannot accept any undertaking in

respect of claims made by advertisers, whether these advertisements are printed as part of the magazine, or are in the

aggressive leads against a small slam in a form of inserts. Legal remedies are available if redress is sought, and readers who have complaints should address them to

suit. In his opinion the notion of ‘Don’t the advertiser or should consult a local Trading Standards Office, or a Citizens’ Advice Bureau, or their own solicitors.

lead away from a king’ was complete Readers should note that prices advertised may not be accurate due to currency exchange rate fluctuations, or tax changes.

nonsense. Without any hesitation, he