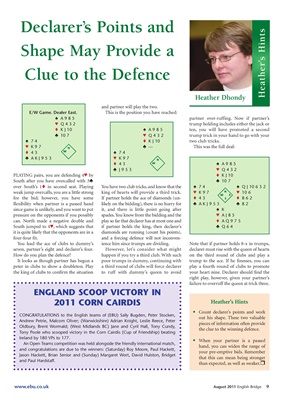 Shape May Provide a

Clue to the Defence

and partner will play the two.

E/W Game. Dealer East. This is the position you have reached:

´ A985 partner over-ruffing. Now if partner’s

™ Q432 trump holding includes either the jack or

weak jump overcalls, you are a little strong king of hearts will provide a third trick. ™ K97 N ™ 10 6

flexibility when partner is a passed hand likely on the bidding), there is no hurry for ® AKJ953 ® 82

since game is unlikely, and you want to put it, and there is little point going after ´ K

pressure on the opponents if you possibly spades. You know from the bidding and the ™ AJ85

can. North made a negative double and play so far that declarer has at most one and t AQ975

South jumped to 4™, which suggests that if partner holds the king, then declarer’s ® Q64

it is quite likely that the opponents are in a diamonds are running (count his points),

four-four fit. and a forcing defence will not inconven-

You lead the ace of clubs to dummy’s ience him since trumps are dividing. Note that if partner holds 8-x in trumps,

seven, partner’s eight and declarer’s four. However, let’s consider what might declarer must rise with the queen of hearts

How do you plan the defence? happen if you try a third club. With such on the third round of clubs and play a

It looks as though partner has begun a poor trumps in dummy, continuing with trump to the ace. If he finesses, you can

the king of clubs to confirm the situation to ruff with dummy’s queen to avoid your heart nine. Declarer should find the

right play, however, given your partner’s

failure to overruff the queen at trick three.

out his shape. These two valuable

the clue to the winning defence.

An Open Teams competition was held alongside the friendly international match, • When your partner is a passed

hand, you can widen the range of

and congratulations are due to the winners: (Saturday) Roy Moore, Paul Hackett,

that this can mean being stronger

than expected, as well as weaker.r