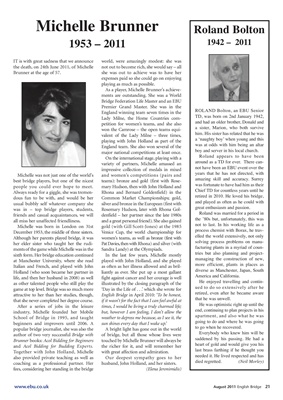 IT is with great sadness that we announce world, were amazingly modest: she was

Brunner at the age of 57. she was out to achieve was to have her

expenses paid so she could go on enjoying

playing as much as possible.

As a player, Michelle Brunner’s achieve-

ments are outstanding. She was a World

Premier Grand Master. She was in the

petition for women’s teams, and she also and had an older brother, donald and

won the Camrose – the open teams equi- a sister, Marion, who both survive

valent of the Lady Milne – three times, him. His sister has related that he was

England team. She also won several of the was at odds with him being an altar

major national competitions at least once. boy and server in his local church.

On the international stage, playing with a Roland appears to have been

variety of partners, Michelle amassed an around as a Td for ever. There can-

Michelle was not just one of the world’s and women’s competitions (pairs and years that he has not directed, with

best bridge players, but one of the nicest teams): bronze and gold (first with Rose- amazing skill and accuracy. Surrey

people you could ever hope to meet. mary Hudson, then with John Holland and was fortunate to have had him as their

Always ready for a giggle, she was tremen- Rhona and Bernard Goldenfield) in the Chief Td for countless years until he

dous fun to be with, and would be her Common Market Championships; gold, retired in 2010. He loved his bridge,

friends and casual acquaintances, we will denfield – her partner since the late 1980s Roland was married for a period in

all miss her unaffected friendliness. and a great personal friend). She also gained the ’80s but, unfortunately, this was

Michelle was born in London on 31st gold (with Gill Scott-Jones) at the 1985 not to last. In his working life as a

December 1953, the middle of three sisters. Venice Cup, the world championship for process chemist with Borax, he trav-

Although her parents played bridge, it was women’s teams, as well as bronze (first with elled the world extensively, not only

her elder sister who taught her the rudi- Pat Davies, then with Rhona) and silver (with solving process problems on manu-

ments of the game while Michelle was in the Sandra Landy) at the Olympiads. facturing plants in a myriad of coun-

at Manchester University, where she read played with John Holland, and she played managing the construction of new,

Italian and French, and played with John as often as her illness allowed and as bril- more efficient, plants in places as

Holland (who soon became her partner in liantly as ever. She put up a most gallant diverse as Manchester, Japan, South

life, and then her husband in 2008) as well fight against cancer and her courage is well america and California.

game at top level. Bridge was so much more ‘Day in the Life of . . .’ which she wrote for ued to do so extensively after he

attractive to her than her studies, though, English Bridge in April 2010: ‘To be honest, retired, even after he became aware

that she never completed her degree course. if it wasn’t for the fact that I can feel awful at that he was unwell.

After a series of jobs in the leisure times, I would be living a truly charmed life; He was optimistic right up until the

industry, Michelle founded her Mobile but, however I am feeling, I don’t allow the end, continuing to plan projects in his

School of Bridge in 1995, and taught weather to depress me because, as I see it, the apartment, and also what he was

beginners and improvers until 2006. A sun shines every day that I wake up.’ going to do and where he was going

popular bridge journalist, she was also the A bright light has gone out in the world to go when he recovered.

author of two very successful Bridge with of bridge, but all those whose lives were Everybody who knew him will be

Brunner books: Acol Bidding for Beginners touched by Michelle Brunner will always be saddened by his passing. He had a

and Acol Bidding for Budding Experts. the richer for it, and will remember her heart of gold and would give you his

Together with John Holland, Michelle with great affection and admiration. last brass farthing if he thought you

also provided private teaching as well as Our deepest sympathy goes to her needed it. He lived respected and has

coaching as a professional partner. Her husband, John Holland, and her sisters. died regretted. (Neil Morley)

fees, considering her standing in the bridge (Elena Jeronimidis)