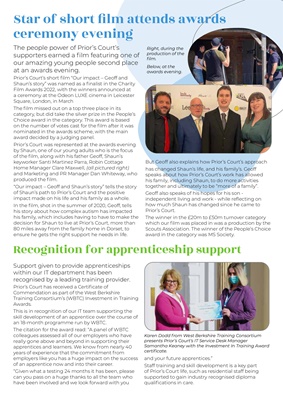 Support given to provide apprenticeships

within our IT department has been

recognised by a leading training provider.

Prior's Court has received a Certificate of

Commendation as part of the West Berkshire

This is in recognition of our IT team supporting the

skill development of an apprentice over the course of

an 18-month programme run by WBTC.

The citation for the award read: "A panel of WBTC

colleagues assessed all of our employers who have

really gone above and beyond in supporting their

apprentices and learners. We know from nearly 40

years of experience that the commitment from

employers like you has a huge impact on the success

of an apprentice now and into their career.

"Given what a testing 24 months it has been, please

have been involved and we look forward with you

and your future apprentices."

Staff training and skill development is a key part

of Prior's Court life, such as residential staff being

Samantha Keaney with the Investment In Training Award

The people power of Prior's Court's

supporters earned a film featuring one of

at an awards evening.

Shaun's story" was named as a finalist in the Charity

Film Awards 2022, with the winners announced at

a ceremony at the Odeon LUXE cinema in Leicester

The film missed out on a top three place in its

category, but did take the silver prize in the People's

Choice award in the category. This award is based

nominated in the awards scheme, with the main

award decided by a judging panel.

Prior's Court was represented at the awards evening

by Shaun, one of our young adults who is the focus

of the film, along with his father Geoff, Shaun's

and Marketing and PR Manager Dan Whiteway, who

"Our impact - Geoff and Shaun's story" tells the story

of Shaun's path to Prior's Court and the positive

impact made on his life and his family as a whole.

his story about how complex autism has impacted

his family, which includes having to have to make the

decision for Shaun to live at Prior's Court, more than

80 miles away from the family home in Dorset, to

ensure he gets the right support he needs in life.

has changed Shaun's life, and his family's. Geoff

speaks about how Prior's Court's work has allowed

his family, including Shaun, to do more activities

together and ultimately to be "more of a family".

Geoff also speaks of his hopes for his son -

independent living and work - while reflecting on

how much Shaun has changed since he came to

The winner in the £20m to £50m turnover category

which our film was placed in was a production by the

Scouts Association. The winner of the People's Choice

award in the category was MS Society.