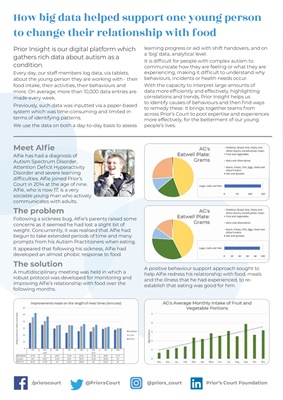 Prior Insight is our digital platform which

gathers rich data about autism as a

Every day, our staff members log data, via tablets,

about the young person they are working with - their

food intake, their activities, their behaviours and

Previously, such data was inputted via a paper-based

system which was time-consuming and limited in

learning progress or aid with shift handovers, and on

It is difficult for people with complex autism to

communicate how they are feeling or what they are

experiencing, making it difficult to understand why

With the capacity to interpret large amounts of

correlations and trends, Prior Insight helps us

to identify causes of behaviours and then find ways

to remedy these. It brings together teams from

across Prior's Court to pool expertise and experiences

more effectively, for the betterment of our young

to change their relationship with food

Alfie has had a diagnosis of

concerns as it seemed he had lost a slight bit of

weight. Concurrently, it was realised that Alfie had

begun to take extended periods of time and many

prompts from his Autism Practitioners when eating.

It appeared that following his sickness, Alfie had

A multidisciplinary meeting was held in which a

robust protocol was developed for monitoring and

improving Alfie's relationship with food over the

and the illness that he had experienced, to reestablish that eating

was good for him.