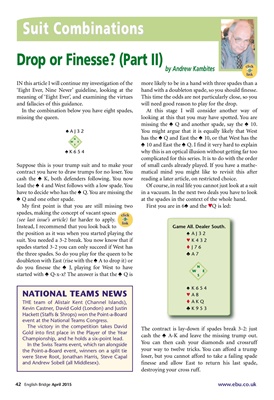 IN this article I will continue my investigation of the

'Eight Ever, Nine Never' guideline, looking at the

meaning of 'Eight Ever', and examining the virtues

and fallacies of this guidance.

In the combination below you have eight spades,

Suppose this is your trump suit and to make your

contract you have to draw trumps for no loser. You

cash the ´ K, both defenders following. You now

lead the ´ 4 and West follows with a low spade. You

have to decide who has the ´ Q. You are missing the

´ Q and one other spade.

My first point is that you are still missing two

Instead, I recommend that you look back to

the position as it was when you started playing the

suit. You needed a 3-2 break. You now know that if

spades started 3-2 you can only succeed if West has

the three spades. So do you play for the queen to be

doubleton with East (rise with the ´ A to drop it) or

do you finesse the ´ J, playing for West to have

hand with a doubleton spade, so you should finesse.

This time the odds are not particularly close, so you

will need good reason to play for the drop.

At this stage I will consider another way of

looking at this that you may have spotted. You are

You might argue that it is equally likely that West

why this is an optical illusion without getting far too

complicated for this series. It is to do with the order

of small cards already played. If you have a mathe matical

Of course, in real life you cannot just look at a suit

in a vacuum. In the next two deals you have to look

at the spades in the context of the whole hand.

The contract is lay-down if spades break 3-2: just

cash the ´ A-K and leave the missing trump out.

You can then cash your diamonds and crossruff

your way to twelve tricks. You can afford a trump

loser, but you cannot afford to take a failing spade

finesse and allow East to return his last spade,

event at the National Teams Congress.

The victory in the competition takes David

Gold into irst place in the Player of the Year

Championship, and he holds a six-point lead.

In the Swiss Teams event, which ran alongside

the Point-a-Board event, winners on a split tie

and Andrew Sobell (all Middlesex).