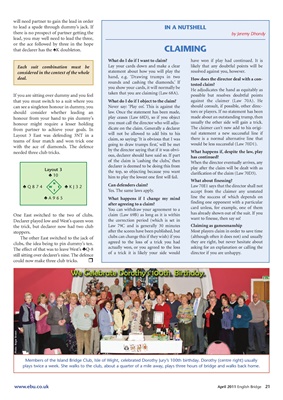 will need partner to gain the lead in order

to lead a spade through dummy’s jack. If IN A NUTSHELL

there is no prospect of partner getting the by Jeremy Dhondy

lead, you may well need to lead the three,

or the ace followed by three in the hope

that declarer has the ´K doubleton. CLAIMING

What do I do if I want to claim? have won if play had continued. It is

considered in the context of the whole statement about how you will play the resolved against you, however.

deal. hand, e.g. ‘Drawing trumps in two How does the director deal with a con-

rounds and cashing the diamonds.’ If tested claim?

you show your cards, it will normally be He adjudicates the hand as equitably as

taken that you are claiming (Law 68A). possible but resolves doubtful points

If you are sitting over dummy and you feel

that you must switch to a suit where you What do I do if I object to the claim? against the claimer (Law 70A). He

can see a singleton honour in dummy, you Never say: ‘Play on’. This is against the should consult, if possible, other direc-

honour from your hand to pin dummy’s play ceases (Law 68D), so if you object made about an outstanding trump, then

honour might require a lesser holding you must call the director who will adju- usually the other side will gain a trick.

from partner to achieve your goals. In dicate on the claim. Generally a declarer The claimer can’t now add to his origi-

claim, so saying: ‘It is obvious that I was there is a normal alternative line that

teams of four match and won trick one

going to draw trumps first,’ will be met would be less successful (Law 70D1).

with the ace of diamonds. The defence

by the director saying that if it was obvi- What happens if, despite the law, play

ous, declarer should have said so. If part has continued?

of the claim is ‘cashing the clubs,’ then When the director eventually arrives, any

Layout 3 the top, so objecting because you want

him to play the lowest one first will fail.

S Yes. The same laws apply. accept from the claimer any unstated

after agreeing to a claim? finding one opponent with a particular

You can withdraw your agreement to a card unless, for example, one of them

One East switched to the two of clubs. claim (Law 69B) as long as it is within has already shown out of the suit. If you

the correction period (which is set in want to finesse, then say so!

the trick, but declarer now had two club Law 79C and is generally 30 minutes Claiming as gamesmanship

stoppers. after the scores have been published, but Most players claim in order to save time

clubs, the idea being to pin dummy’s ten. agreed to the loss of a trick you had they are right, but never hesitate about

The effect of that was to leave West’s ®Q-8 actually won, or you agreed to the loss asking for an explanation or calling the

of a trick it is likely your side would director if you are unhappy.

plays twice a week. She walks to the club, about a quarter of a mile away, plays three hours of bridge and walks back home.