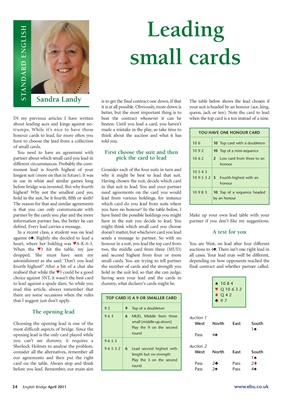 Sandra Landy is to get the final contract one down, if that The table below shows the lead chosen if

it is at all possible. Obviously, more down is your suit is headed by an honour (ace, king,

better, but the most important thing is to queen, jack or ten). Note the card to lead

IN my previous articles I have written beat the contract whenever it can be when the top card is a ten instead of a nine.

about leading aces and kings against no- beaten. Until you lead a card, you haven’t

trumps. While it’s nice to have those made a mistake in the play, so take time to

YOU HAVE ONE HONOUR CARD

honour cards to lead, far more often you think about the auction and what it has

have to choose the lead from a collection told you. 10 6 10 Top card with a doubleton

in use in whist and similar games long Having chosen the suit, decide which card honour

before bridge was invented. But why fourth in that suit to lead. You and your partner

highest? Why not the smallest card you need agreements on the card you would 10 9 8 3 10 Top of a sequence headed

hold in the suit, be it fourth, fifth or sixth? lead from various holdings, for instance by an honour

is that you can only communicate with you have no honour? In the table below, I

information partner has, the better he can have in the suit you decide to lead. You partner if you don’t like my suggestions.

defend. Every lead carries a message. might think which small card you choose

In a recent class, a student was on lead doesn’t matter, but whichever card you lead A test for you

against 6´. Rightly she decided to lead a sends a message to partner. So with no

heart, where her holding was ™A-K-6-3. honour in a suit, you lead the top card from You are West, on lead after four different

When the ™3 hit the table, my jaw two, the middle card from three (MUD) auctions to 4´. There isn’t one right lead in

dropped. She must have seen my and second highest from four or more all cases. Your lead may well be different,

astonishment as she said: ‘Don’t you lead small cards. You are trying to tell partner depending on how opponents reached the

fourth highest?’ After a bit of a chat she the number of cards and the strength you final contract and whether partner called.

realised that while the ™3 could be a good hold in the suit led, so that she can judge,

choice against 3NT, it wasn’t the best card having seen your lead and the cards in

to lead against a spade slam. So while you dummy, what declarer’s cards might be. ´ 10 8 4

there are some occasions when the rules t Q42

TOP CARD IS A 9 OR SMALLER CARD

most difficult aspects of bridge. Since the Play the 9 on the second 1´

opening lead is the only card played while round Pass 4´

Sherlock Holmes to analyse the problem, 96532 6 Lead second highest with

consider all the alternatives, remember all length but no strength

card on the table. Always stop and think round

before you lead. Remember, our main aim Pass 2´ Pass 4´