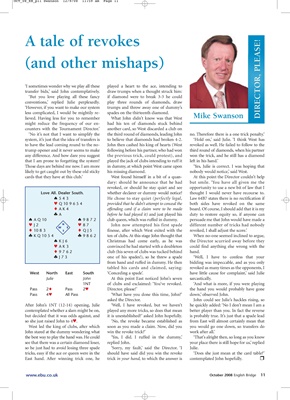 A tale of revokes

‘I sometimes wonder why we play all these played a heart to the ace, intending to

‘However, if you want to make our system trumps and throw away one of dummy’s

less complicated, I would be mightily re- spades on the thirteenth diamond.

lieved. Having less for you to remember What John didn’t know was that West Mike Swanson

counters with the Tournament Director.’ another card, so West discarded a club on

‘No it’s not that I want to simplify the the third round of diamonds, leading John no. Therefore there is a one trick penalty.’

system, it’s just that the idea of transfers is to believe that diamonds had broken 4-2. ‘Hold on,’ said Julie. ‘I think West has

to have the lead coming round to the no- John then cashed his king of hearts (West revoked as well. He failed to follow to the

trump opener and it never seems to make following before his partner, who had won third round of diamonds, when his partner

any difference. And how dare you suggest the previous trick, could protest), and won the trick, and he still has a diamond

that I am prone to forgetting the system? played the jack of clubs intending to ruff it left in his hand.’

Those days are behind me now. I am more in dummy, at which point West came upon ‘Yes, Julie is correct. I was hoping that

likely to get caught out by these old sticky his missing diamond. nobody would notice,’ said West.

cards that they have at this club.’ West found himself in a bit of a quan- At this point the Director couldn’t help

dary: should he announce that he had but smile. ‘You have all given me the

revoked, or should he stay quiet and see opportunity to use a new bit of law that I

Love All. Dealer South. whether declarer or dummy would notice? thought I would never have recourse to.

♠543 He chose to stay quiet (perfectly legal, Law 64B7 states there is no rectification if

♦AK4 offending card if a claim were to be made board. Of course, I should add that it is my

♣A before he had played it) and just played his duty to restore equity so, if anyone can

♠KJ6 Christmas had come early, as he was the Director scurried away before they

♦9762 club (his seven of clubs was tucked behind hand.

♣J73 one of his spades!), so he threw a spade ‘Well, I have to confess that your

from hand and ruffed in dummy. He then bidding was impeccable, and as you only

tabled his cards and claimed, saying: revoked as many times as the opponents, I

1NT of clubs and exclaimed: ‘You’ve revoked. ‘And what is more, if you were playing

Pass 2♦ Pass 2♥ Director, please!’ the hand you would probably have gone

Pass 4♥ All Pass ‘What have you done this time, John?’ down,’ observed John.

asked the Director. John could see Julie’s hackles rising, so

contemplated whether a slam might be on, played any more tricks, so does that mean better player than you. In fact the reverse

but decided that it was odds against, and it is unestablished?’ asked John hopefully. is probably true. It’s just that a spade lead

so she just raised John to 4♥. ‘No, the revoke became established as from East will almost certainly mean that

West led the king of clubs, after which soon as you made a claim. Now, did you you would go one down, so transfers do

John stared at the dummy wondering what win the revoke trick?’ work after all.’

the best way to play the hand was. He could ‘Yes, I did. I ruffed in the dummy,’ ‘That’s alright then, so long as you know

see that there was a certain diamond loser, replied John. your place there is still hope for us,’ replied

so he just had to avoid losing three spade ‘Sorry, my fault,’ said the Director. ‘I Julie.

tricks, easy if the ace or queen were in the should have said did you win the revoke ‘Does she just mean at the card table?’

East hand. After winning trick one, he trick in your hand, to which the answer is contemplated John hopefully.