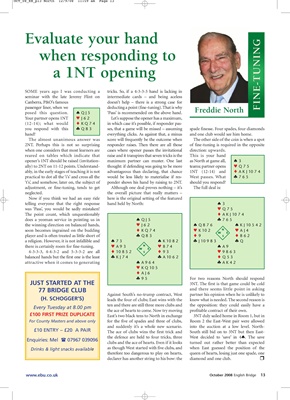 Canberra, P&O’s famous doesn’t help – there is a strong case for

passenger liner, when we deducting a point (fine-tuning). That is why

posed this question. ♠ QJ5 ‘Pass’ is recommended on the above hand. Freddie North

Your partner opens 1NT ♥J62 Let’s suppose the opener has a maximum,

you respond with this ♣Q83 ses, that a game will be missed – assuming spade finesse. Four spades, four diamonds

hand? everything clicks. As against that, a minus and one club would see him home.

2NT. Perhaps this is not so surprising responder raises. Then there are all those of fine-tuning is required in the opposite

when one considers that most learners are cases where opener passes the invitational direction: upwards.

opener’s 1NT should be raised (invitation- maximum partner can muster. One last as North at game all, ♠3

ally) to 2NT on 11-12 points. Understand- thought: if defending was going to be more teams; partner opens ♥Q75

practical to dot all the ‘i’s’ and cross all the would be less likely to materialise if res- West passes. What ♣765

‘t’s’, and somehow, later on, the subject of ponder shows his hand by raising to 2NT. should you respond?

adjustment, or fine-tuning, tends to get Although one deal proves nothing – it’s The full deal is:

telling everyone that the right response hand held by North: ♠ 3

there is certainly room for fine-tuning. ♥ A93

attractive when it comes to generating ♠ A964 ♣AK42

♣ 95 For two reasons North should respond

JUST STARTED AT THE 3NT. The first is that game could be cold

77 BRIDGE CLUB and there seems little point in asking

Against South’s no-trump contract, West partner his opinion when he is unlikely to

(H. SCHOGGER’S) leads the four of clubs; East wins with the know what is needed. The second reason is

ten and there are still three more clubs and the opposition: they could easily have a

the ace of hearts to come. Now try moving profitable contract of their own.

For County Masters and above only for the five of spades and three of clubs, Room 2 the East-West pair were allowed

and suddenly it’s a whole new scenario. into the auction at a low level. North-

the defence are held to four tricks, three West decided to ‘save’ in 4♠. The save

Enquiries: Mel 07967 039096 clubs and the ace of hearts. Even if it looks turned out rather better than expected

Drinks & light snacks available as though West started with five clubs, and when East guessed the position of the

therefore too dangerous to play on hearts, queen of hearts, losing just one spade, one

declarer has another string to his bow: the diamond and one club.