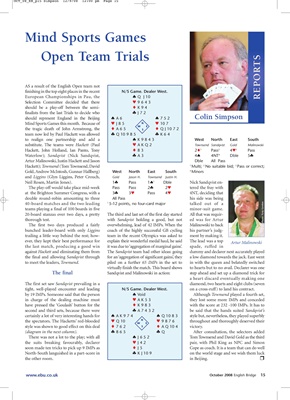 AS a result of the English Open team not

finishing in the top eight places in the recent N/S Game. Dealer West.

Selection Committee decided that there ♥9643

should be a play-off between the semi- ♦K94

finalists from the last Trials to decide who ♣J72

should represent England in the Beijing ♠ A6 ♠752 Colin Simpson

40-board matches and the two leading 1

5-12 points, no four-card major talked out of a

teams playing a final of 100 boards in five minor-suit game.

20-board stanzas over two days, a pretty The third and last set of the first day started All that was requir-

thorough test. with Sandqvist holding a good, but not ed was for Artur

The first two days produced a fairly overwhelming, lead of 42 IMPs. When the Malinowski to back

trailing a little way behind the rest; how- team in the recent Olympics was asked to ment by making it.

ever, they kept their best performance for explain their wonderful medal haul, he said The lead was a top Artur Malinowski

the last match, producing a good win it was due to ‘aggregation of marginal gains’. spade, ruffed in

against Hackett and eliminating them from The Sandqvist team had other ideas: going dummy and declarer next accurately played

the final and allowing Sandqvist through for an ‘aggregation of significant gains’, they a low diamond towards the jack. East went

to meet the leaders, Townsend. piled on a further 65 IMPs in the set to in with the queen and belatedly switched

virtually finish the match. This board shows to hearts but to no avail. Declarer was one

The final Sandqvist and Malinowski in action: step ahead and set up a diamond trick for

a heart discard eventually making one

tight, well-played encounter and leading N/S Game. Dealer West. on a cross-ruff) to land his contract.

by 19 IMPs. Someone said that the person ♠ Void Although Townsend played a fourth set,

second and third sets, because there were ♣A7432 be said that the hands suited Sandqvist’s

certainly a lot of very interesting hands for ♠ AK974 ♠ Q 10 8 3 style but, nevertheless, they played superbly

♥9876 throughout and thoroughly deserved their

(diagram in the next column). ♣ 865 ♣Q After consultation, the selectors added

There was not a lot to the play; with all ♠J652 Tom Townsend and David Gold as the third

soon made ten tricks to pick up 9 IMPs as ♦J5 Cope as coach. It is a team that can do well

the other room. in Beijing.