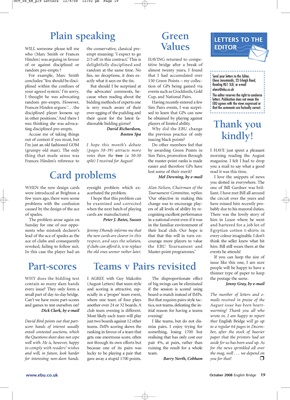 Plain speaking Green LETTERS TO THE

WILL someone please tell me the conservative, classical pre- Values EDITOR

who (Marc Smith or Frances empt meaning: ‘I expect to go

Hinden) was arguing in favour 2/3 off in this contract.’ This is HAVING returned to compe-

random pre-empts ? random at the same time. No almost twenty years, I found

For example, Marc Smith lies, no deceptions, it does ex- that I had accumulated over Send your letters to the Editor,

concludes: ‘You should be disci- actly what it says on the tin. 150 Green Points – my collec- Elena Jeronimidis, 23 Erleigh Road,

plined within the confines of But should I be surprised at tion of GPs being gained via Reading RG1 5LR, or e-mail

your agreed system.’ I’m sorry, the advocates’ comments, be- events such as Crockfords, Gold

I thought he was advocating cause when reading about the Cup, and National Pairs. The editor reserves the right to condense

letters. Publication does not mean the

random pre-empts. However, bidding methods of experts one Having recently entered a few EBU agrees with the views expressed or

Frances Hinden argues: ‘. . . the is very much aware of their Sim Pairs events, I was surpri- that the comments are factually correct.

in other positions.’ And there I their quest for the latest fa- be obtained by playing against

was thinking she was advoca-

Why did the EBU change

Accuse me of taking things

out of context if you must, but

Boston Spa the previous practice of only

(grumpy old man). The only (pages 38-39) attracts more by awarding Green Points in I HAVE just spent a pleasant

thing that made sense was votes than the two (a 50-50 Sim Pairs, promotion through morning reading the August

Frances Hinden’s reference to split) I received for August! the master-point ranks is made magazine. I felt I had to drop

lost some of their merit? read it was this time.

Card problems Mel Downing, by e-mail I love the snippets of news

you slotted in everywhere. The

WHEN the new design cards eyesight problem which ex- Alan Nelson, Chairman of the one of Bill Gardner was bril-

were introduced at Brighton a acerbated the problem. Tournament Committee, replies: liant. I have met Bill all around

few years ago, there were some I hope that this problem can ‘Our objective in making this the circuit over the years and

caused by the design of the ace when the next batch of playing ers of all levels of ability by re- bably due to his mayoral duties.

of spades. cards are manufactured. cognising excellent performance There was the lovely story of

The problem arose again on Peter J. Bates, Sussex in a national event even if it was him in Luxor where he went

nents who mistook declarer’s Jeremy Dhondy informs me that their local club. Our hope is Egyptian cotton t-shirts in

lead of the ace of spades as the the new cards are clearer in this that that this will in turn en- every colour imaginable. I don’t

ace of clubs and consequently respect, and says the solution, courage more players to value think the seller knew what hit

revoked, failing to follow suit. if clubs can afford it, is to replace the EBU Tournament and him. Bill still wears them at the

In this case the player had an the old ones sooner rather later. Master-point programmes.’ events he attends!

If you can keep the size of

thinner type of paper to keep

WHY does the bidding test I AGREE with Guy Malcolm The disproportionate effect the postage the same.

contain so many slam hands (August Letters) that team style of big swings can be eliminated Jenny Gray, by e-mail

every issue? They only form a and scoring is attractive, esp- if the session is scored using

small part of day-to-day bridge. ecially in a ‘proper’ team event, board-a-match instead of IMPs. The number of letters and e-

and games to test ourselves on? another over 24 or 32 boards. A tics, not teams, defeating the in- August issue has been heart-

Dick Clark, by e-mail club team evening is different. itial reason for having a teams warming! Thank you all who

Most likely each team will play evening! wrote in. I am happy to report

David Bird points out that part- just two boards against 12 other I like teams, but do not dis- that English Bridge will go up

score hands of interest usually teams. IMPs scoring skews the miss pairs. I enjoy trying for to a regular 64 pages in Decem-

entail contested auctions, which ranking in favour of a team that something, losing 1700 but ber, after the stock of heavier

the Questions sheet does not cope gets one enormous score, often realising that has only cost our paper that the printers had set

well with. He is, however, happy not through its own efforts but pair 4%, at pairs, rather than aside for us has been used up. As

and will, in future, look harder lucky to be playing a pair that team. the mag, well . . . we depend on

for interesting non-slam hands. gave away a stupid 1700 points. Barry North, Cobham you for that!