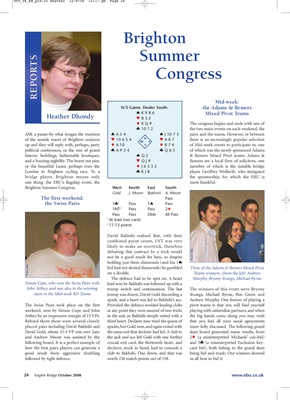 ♦KQ9 The congress begins and ends with one of

♥AK7 there is an increasingly popular selection

political conferences, or the mix of grand ♣ A954 ♣Q63 of which was the newly sponsored Adams

and a buzzing nightlife. The burnt out pier, ♥QJ9 Remers are a local firm of solicitors, one

or the beautiful Lanes, perhaps even the ♦J6532 member of which is the notable bridge

London to Brighton cycling race. To a ♣KJ8 player Geoffrey Wolfarth, who instigated

bridge player, Brighton means only the sponsorship, for which the EBU is

one thing: the EBU’s flagship event, the most thankful.

David Bakhshi realised that, with their

likely to make an overtrick, therefore

defeating this contract by a trick would

not be a good result for him, so despite

holding just three diamonds (and his 1♠

on a double. Teams winners: (from the left) Andrew

The defence had to be spot on. A heart Murphy, Bryony Youngs, Michael Byrne

Simon Cope, who won the Swiss Pairs with lead won by Bakhshi was followed up with a

John Atthey, and was also in the winning trump switch and continuation. The last The winners of this event were Bryony

spade, and a heart was led to Bakhshi’s ace. Andrew Murphy. One feature of playing a

weekend, won by Simon Cope and John at any point they were assured of two tricks playing with unfamiliar partners, and when

Atthey by an impressive margin of 15 VPs. in the suit, so Bakhshi simply exited with a the big hands come along you may wish

Behind them there were several closely third heart. Declarer now tried the queen of that you had all your usual agreements

placed pairs including David Bakhshi and spades, but Gold won, and again exited with more fully discussed. The following grand

David Gold, whose 15-5 VP win over Jane the same suit that declarer had led. A club to slam board generated many results, from

following board. It is a perfect example of crucial exit card, the thirteenth heart, and and 5♣ (a misinterpreted Exclusion Key-

how the best pairs players can generate a declarer, stuck in hand, had to concede a card bid), both failing, to the grand slam

good result from aggressive doubling club to Bakhshi. One down, and that was being bid and made. Our winners showed