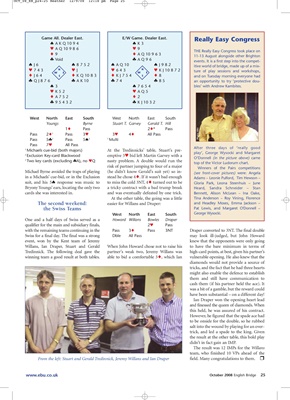 After three days of ‘really good

Michaels cue-bid (both majors) At the Tredinnicks’ table, Stuart’s pre-

Two key cards (excluding ♣A), no ♥Q nasty problem. A double would run the top of the Victor Ludorum chart.

Michael Byrne avoided the traps of playing (he didn’t know Gerald’s suit yet) so in- (see front-cover pictures) were: Angela

in a Michaels’ cue-bid, or in the Exclusion stead he chose 4♦. If it wasn’t bad enough Adams – Leonie Pulford, Tim Hewson –

suit, and his 5♠ response was music to to miss the cold 3NT, 4♦ turned out to be Gloria Park, Leona Steenhuis – June

cards she was interested in. and was eventually defeated by one trick. Bennett, Alison McLean – Ina Oake,

At the other table, the going was a little Tina Anderson – Roy Vining, Florence

The second weekend: easier for Willans and Draper: and Headley Moses, Emma Jackson –

qualifier for the main and subsidiary finals, 2♥ Pass

with the remaining teams continuing in the Pass 3♦ Pass 3NT Draper converted to 3NT. The final double

Swiss for a final day. The final was a strong Dble All Pass may look ill-judged, but John Howard

event, won by the Kent team of Jeremy knew that the opponents were only going

Willans, Ian Draper, Stuart and Gerald When John Howard chose not to raise his to have the bare minimum in terms of

Tredinnick. The following deal gave the partner’s weak two, Jeremy Willans was high-card points, at best, given his partner’s

winning team a good result at both tables. able to bid a comfortable 3♦, which Ian vulnerable opening. He also knew that the

diamonds would not provide a source of

tricks, and the fact that he had three hearts

them and still have communication to

cash them (if his partner held the ace). It

was a bit of a gamble, but the reward could

have been substantial – on a different day!

and finessed the queen of diamonds. When

this held, he was assured of his contract.

However, he figured that the spade ace had

to be onside for the double, so he rubbed

salt into the wound by playing for an over-

trick, and led a spade to the king. Given

the result at the other table, this bold play

didn’t in fact gain an IMP.

The result was 12 IMPs for the Willans

team, who finished 10 VPs ahead of the

From the left: Stuart and Gerald Tredinnick, Jeremy Willans and Ian Draper field. Many congratulations to them.