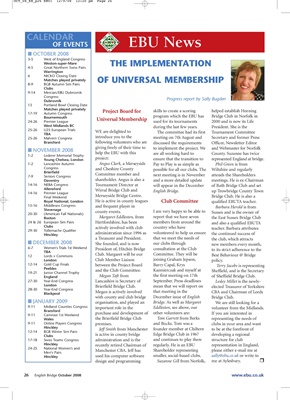 Bournemouth program which the EBU has Bridge Club in Norfolk in

West Midlands BC during the last few years. President. She is the

The committee had its first Tournament Committee

giving freely of their time to to implement the project. We and Webmaster for Norfolk

s NOVEMBER 2008 help the EBU with this

are all working hard to County. Suzanne has twice

Young Chelsea, London project: ensure that the transition to represented England at bridge.

1-2 Lancashire Autumn Angus Clark, a Merseyside Pay to Play is as simple as Phil Green is from

Congress and Cheshire County possible for all our clubs. The Wiltshire and regularly

Committee member and next meeting is in November attends the Shareholders

Daventry shareholder. Angus is also a and a more detailed update meetings. He is ex-Chairman

county events. I am very happy to be able to Sussex and is the owner of

Boston Margaret Eddleston, from report that we have seven the East Sussex Bridge Club

24 & 26 European Sim Pairs Hertfordshire, has been members from around the and also a qualified EBUTA

Clubs actively involved with club country who have

a Treasurer and President. that we meet the needs of the club, which attracts

s DECEMBER 2008 She founded, and is now our clubs through new members every month,

to its strict adherence to the

12 Lords v Commons Club. Margaret will be our Committee. They will be Best Behaviour @ Bridge

Peebles Kazmierczak and myself at

and the Club Committee. Sheffield, and is the Secretary

England Megan Taft from the first meeting on 17th of Sheffield Bridge Club.

London Brierfield Bridge Club. mean that we will report on elected Treasurer of Yorkshire

s JANUARY 2009 organisation, and played an Bridge. As well as Margaret We are still looking for a

9-11 Midland Counties Congress important role in the Eddleston, see above, our volunteer from the Midlands.

purchase and development of other volunteers are: If you are interested in

9-11 Online Players Congress premises. and Bucks. Tom was a clubs in your area and want

Hinckley recently retired Chairman of regularly. He is an EBU representation in England,

Manchester CBA. Jeff has Shareholder representing please either e-mail me at

design and programming Suzanne Gill from Norfolk, me at Aylesbury.