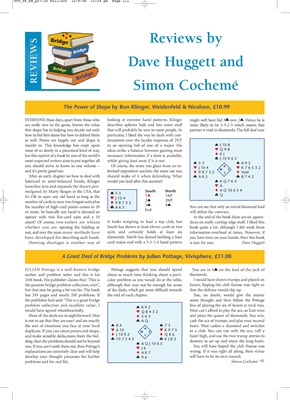 The Power of Shape by Ron Klinger, Weidenfeld & Nicolson, £10.99

EVERYONE these days, apart from those who looking at extreme hand patterns. Klinger might well have bid 3♣ over 2♠. Hence he is

are really new to the game, knows the value describes splinter bids and lots more stuff more likely to be 3-3-2-5 which means that

that shape has in helping you decide not only that will probably be new to most people. In partner is void in diamonds. The full deal was:

how to bid thin slams but how to defend them particular, I liked the way he dealt with con-

as well. Points are largely out and shape is tinuations over the Jacoby response of 2NT

mainly in. This knowledge has crept upon to an opening bid of one of a major. His ♠ J 10 8

most of us slowly in a piecemeal kind of way, ideas strike a balance between gaining most ♥ Q98

but this reprint of a book by one of the world’s necessary information if a slam is available, ♦ KJ

most respected writers aims to put together all whilst giving least away if it is not.

After an early chapter on how to deal with should make of it when defending. What ♣ AK5 ♣ 8742

balanced or semi-balanced hands, Klinger would you lead after this auction? ♠ KQ764

launches into and expands the theory pro- ♥ A

number of cards in your two longest suits plus 2♠ 2NT

or more. So basically any hand is deemed an will defeat the contract.

count! Of course, two-suiters are whizzo It looks tempting to lead a top club, but dices on really cutting-edge stuff. I liked this

whether you are opening the bidding or South has shown at least eleven cards in two book quite a lot, although I felt weak from

not, and over the years many methods have suits and certainly holds at least six information-overload at times. However, if

been developed for describing such hands. diamonds. North has denied holding a four you have time on your hands, then this book

Showing shortages is another way of card major and with a 3-3-1-6 hand pattern is just for you. Dave Huggett

A Great Deal of Bridge Problems by Julian Pottage, Vivisphere, £11.00

author and problem setter and this is his about as much time thinking about a parti- diamonds.

24th book. His publisher claims that: ‘This is cular problem as you would do at the table, I would have drawn trumps and played on

the greatest bridge problem collection, ever!’, although that may not be enough for some hearts, hoping the club finesse was right or

but that may be going a bit too far. The book of the deals, which get more difficult towards that the defence would slip up.

has 293 pages and nearly 200 problems. If the end of each chapter. You, no doubt, would give the matter

the publisher had said: ‘This is a great bridge some thought and then follow the Pottage

line of playing the six of hearts at trick two.

would have agreed wholeheartedly. ♥ Q8432 West can’t afford to play the ace, so East wins

Most of the deals are straightforward (that ♦ 543 and plays the queen of diamonds. You win,

is not to say that they are easy) and are exactly ♣ AQ cash the ace of trumps, and play your second

the sort of situations you face at your local ♠ 84 ♠ 73 heart. West cashes a diamond and switches

ding, then the problems should not be beyond

dummy to set up and enjoy the long heart.

you. If you can’t work them out, then Pottage’s ♥ J6 You will have hoped the club finesse was

explanations are extremely clear and will help ♦ AK7 wrong. If it was right all along, then virtue

develop your thought processes for further ♣ 96 will have to be its own reward.