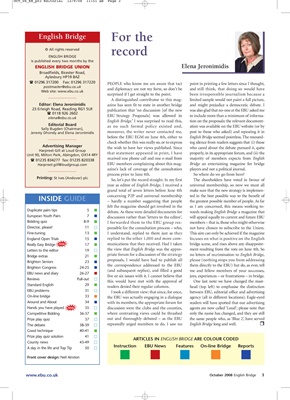 English Bridge For the

and diplomacy are not my forte, so don’t be and still think, that doing so would have

surprised if I get straight to the point. been irresponsible journalism because a

A distinguished contributor to this mag- limited sample would not paint a full picture,

Editor: Elena Jeronimidis azine has seen fit to state in another bridge and might prejudice a democratic debate. I

23 Erleigh Road, Reading RG1 5LR publication that ‘no discussion [of the new was also glad that no-one at the EBU asked me

English Bridge.’ I was surprised to read this, tion on the proposals: the relevant document-

Editorial Board as no such formal policy existed and, ation was available on the EBU website (or by

Jeremy Dhondy and Elena Jeronimidis moreover, the writer never contacted me, post to those who asked) and repeating it in

check whether this was really so, or to express ing silence from readers suggests that (i) those

Advertising Manager the wish to have her views published. Since who cared about the debate pursued it, quite

that statement appeared in print, I have properly, in its appropriate forum, and (ii) the

Harpreet.gill@loudgroup.com EBU members complaining about this mag- Bridge an entertaining magazine for bridge

process prior to June 4th. So where do we go from here?

Printing: St Ives (Andover) plc So, let’s put the record straight. In my first The shareholders have voted in favour of

year as editor of English Bridge, I received a universal membership, so now we must all

INSIDE GUIDE – hardly a number suggesting that people the greatest possible number of people. As far

felt the magazine should get involved in the as I am concerned, this means working to-

Duplicate pairs tips 5 debate. As these were detailed documents for wards making English Bridge a magazine that

European Youth Pairs 7 discussion rather than ‘letters to the editor’, will appeal equally to current and future EBU

Bidding quiz 8-9 I forwarded them to the EBU group res- members – that is, those who might otherwise

Director, please! 11 ponsible for the consultation process – who, not have chosen to subscribe to the Union.

Fine-tuning 13 I understand, replied to them just as they This aim can only be achieved if the magazine

England Open Trials 15 replied to the other 1,000 and more com- focuses on what is positive on the English

Really Easy Bridge NEW 17 munications that they received. Had I taken bridge scene, and rises above any disappoint-

Letters to the editor 19 the view that English Bridge was the appro- ment resulting from the vote on June 4th. So

Bridge extras 21 priate forum for a discussion of the strategy no letters of recrimination to English Bridge,

Brighton Seniors 23 proposals, I would have had to publish all please (nothing stops you from addressing

the correspondence addressed to the EBU them directly to the EBU) but do, as ever, tell

(and subsequent replies), and filled a good me and fellow members of your successes,

five or six issues with it. I cannot believe that joys, experiences – or frustrations – in bridge.

this would have met with the approval of One last note: we have changed the mast-

EBU problems 31 I took a different view: that since, for once, between EBU, editorial office and advertising

On-line bridge 33 the EBU was actually engaging in a dialogue agency (all in different locations). Eagle-eyed

Around and About 34 with its members, the appropriate forum for readers will have spotted that our advertising

Hands you have played NEW 35 discussion were the clubs and the counties, agents are now called ‘Loud’: please note that

Competitive Bidding 36-37 where contrasting views could be thrashed only the name has changed, and they are still

Prize play quiz 37 out and thoroughly debated – as the EBU the same people who, as ‘Blue 2’, have served

The debate 38-39 repeatedly urged members to do. I saw no English Bridge long and well.