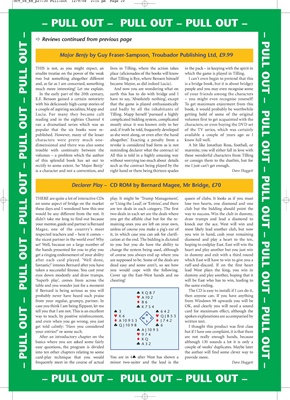 THIS is not, as you might expect, an lives in Tilling, where the action takes in the pack – in keeping with the spirit in

erudite treatise on the power of the weak place (aficionados of the books will know which the game is played in Tilling.

two but something altogether different that Tilling is Rye, where Benson himself I can’t even begin to pretend that this

and, as far as I am concerned, something became Mayor, as did indeed Lucia). is a bridge book, but it is about bridgey

much more interesting! Let me explain. And now you are wondering what on people and you may even recognise some

In the early part of the 20th century, earth this has to do with bridge and I of your friends among the characters

E.F. Benson gained a certain notoriety have to say, ‘Absolutely nothing’, except – you might even recognise yourself!

a couple of aspiring socialites, Mapp and and badly by all the inhabitants of book, it would probably be worthwhile

Lucia. For many they became cult Tilling. Mapp herself ‘pursued a highly getting hold of some of the original

reading and in the eighties Channel 4 complicated bidding system, complicated volumes first to get acquainted with the

ran a dramatised series which was so mostly since it was known only to her characters, or even buying the DVD set

popular that the six books were re- and, if truth be told, frequently developed of the TV series, which was certainly

published. However, many of the lesser as she went along, or even after the hand available a couple of years ago as I

characters were pretty much one- altogether.’ Exacting a penalty from a know full well.

dimensional and there was also some revoke is considered bad form as is not A bit like Jonathan Ross, football, or

trouble with continuity between the reminding declarer what the contract is! marmite, you will either fall in love with

of this splendid book has set out to without worrying too much about details or consign them to the dustbin, but for

rectify to some extent. So ‘Major Benjy’ such as the contract being played by the me I just can’t get enough.

is a character and not a convention, and right hand or there being thirteen spades Dave Huggett

THERE are quite a lot of interactive CDs play. It might be ‘Trump Management’, queen of clubs. It looks as if you must

on some aspect of bridge on the market or ‘Using the Lead’, or ‘Entries’, and there lose two hearts, one diamond and one

these days and I wondered how this one are ten deals in each category. The first club but the bidding should point the

would be any different from the rest. It two deals in each set are the deals where way to success. Win the club in dummy,

your mentor, guide and partner is Bernard maining ones you are left on your own, knock out the ace. West will win and

Magee, one of the country’s most unless of course you make a pig’s ear of most likely lead another club, but now

respected teachers and – here it comes – it, in which case you can ask for clarifi- you win in hand, cash your remaining

the nicest partner in the world ever! Why cation at the end. The bidding is dictated diamond and play a heart to the ten,

so? Well, because on a large number of to you but you do have the ability to hoping to endplay East. East will win the

the hands presented for you to play you change the system being used, although heart and play another but you just win

after each card played. ‘Well done, are supposed to be. Some of the deals are which East will have to win to give you a

fantastic!’ intones Bernard after you have dead easy and some aren’t, so see how ruff-and-discard. If on the first heart

taken a successful finesse. You cast your you would cope with the following. lead West plays the king, you win in

eyes down modestly and draw trumps. Cover up the East-West hands and no dummy and play another, hoping that it

‘Superb play’, comes from across the cheating! will be East who has to win, leading to

table and you wonder just for a moment the same ending.

if Bernard is being serious as you will The CD is easy to install; if I can do it,

probably never have heard such praise ♥ A 10 2 then anyone can. If you have anything

from your regular, grumpy, partner. In ♦ 86 from Windows 98 upwards you will be

case you think I am being flippant, let me ♣ K754 OK, and clearly you will need a sound

tell you that I am not. This is an excellent ♠ 3 ♠ 642 card for maximum effect, although the

♥ QJ853 spoken explanations are accompanied by

After an introductory chapter on the

are not really enough hands, because

basics where you are asked some fairly ♣ A32

although 130 sounds a lot it is only a

card-play technique that you would You are in 4♠ after West has shown a provide more.