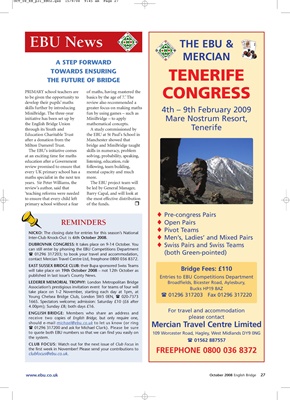 THE FUTURE OF BRIDGE TENERIFE

to be given the opportunity to

of maths, having mastered the

MiniBridge. The three-year fun by using games – such as

initiative has been set up by MiniBridge – to apply Mare Nostrum Resort,

through its Youth and A study commissioned by Tenerife

Education Charitable Trust the EBU at St Paul’s School in

after a donation from the Manchester showed that

at an exciting time for maths solving, probability, speaking,

every UK primary school has a mental capacity and much

maths specialist in the next ten more.

years. Sir Peter Williams, the The EBU project team will

review’s author, said that be led by General Manager,

‘teaching reforms were needed Barry Capal, and will look at

to ensure that every child left the most effective distribution

primary school without a fear of the funds.

NICKO: The closing date for entries for this season’s National

DUBROVNIK CONGRESS: It takes place on 9-14 October. You

can still enter by phoning the EBU Competitions Department

take place on 1-2 November, starting each day at 1pm, at

For travel and accommodation

receive two copies of English Bridge, but only require one, please contact

should e-mail michael@ebu.co.uk to let us know (or ring

to quote both EBU numbers so that we can find you easily on 109 Worcester Road, Hagley, West Midlands DY9 0NG

CLUB FOCUS: Watch out for the next issue of Club Focus in

the first week in November! Please send your contributions to