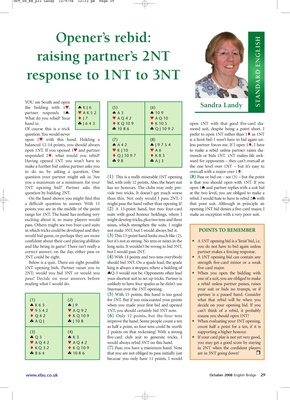 response to 1NT to 3NT

YOU are South and open

question. You would never prefer to open 1NT rather than 1♦ as 1NT

to do so, by asking a question. One overcall with a major over 1♦.

you a maximum or a minimum for your bid, with only 12 points. Also, the heart suit is that you should open with 1NT. If you

1NT opening bid?’ Partner asks this has no honours. The clubs may only pro- open 1♠ and partner replies with a suit bid

question by bidding 2NT. vide two tricks. It doesn’t get much worse at the two level, you are obliged to make a

On the hand shown you might find this than this. Not only would I pass 2NT, I rebid. I would hate to have to rebid 2♠ with

a difficult question to answer. With 13 might pass the hand rather than opening it! that poor suit. Although in principle an

points you are in the middle of the point (2) A 13-point hand, but two four-card opening 1NT bid denies a five-card major, I

range for 1NT. The hand has nothing very suits with good honour holdings, where I make an exception with a very poor suit.

exciting about it, so many players would might develop tricks, plus two tens and three

in which tricks could be developed and they not make 3NT, but I would always bid it. POINTS TO REMEMBER

confident about their card playing abilities but it’s not as strong. No tens or nines in the • A 1NT opening bid is a ‘limit’ bid, i.e.

and like being in game! There isn’t really a long suits. It wouldn’t be wrong to bid 3NT, you do not have to bid again unless

correct answer; on the day, either pass or but I would pass 2NT. partner makes a forcing response.

3NT could be right. (4) With 14 points and two tens everybody • A 1NT opening bid can contain any

Below is a quiz. There are eight possible should bid 3NT. On a spade lead, the spade strength five-card minor or a weak

1NT opening bids. Partner raises you to king is always a stopper, where a holding of five-card major.

2NT; would you bid 3NT or would you ♠Q-3 would not be. Opponents often lead • When you open the bidding with

pass? Decide on your answers before your shortest suit to set up tricks. Partner is one of a suit, you are obliged to make

reading what I would do. unlikely to have four spades as he didn’t use a rebid unless partner passes, raises

Stayman over the 1NT opening. your suit or bids no trumps, or if

(5) With 15 points, this hand is too good partner is a passed hand. Consider

(1) (2) for 1NT. But if you miscounted your points what that rebid will be when you

♠K65 ♠J9 when you made your first bid and opened decide on your opening bid. If you

(3) (4) 2 points on that reckoning! With a strong supporting a higher honour.

♠Q3 ♠K3 five-card club suit to generate tricks, I • If your card play is not yet very good,

♥AQ42 ♥AQ42 would always rebid 3NT on this hand. you may get a good score by staying

because you only have 11 points. I would