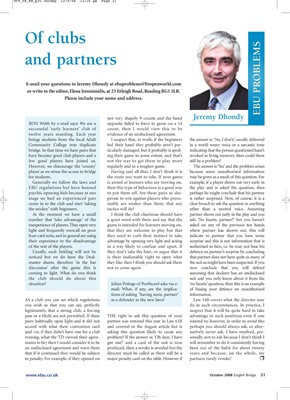 not very shapely 9 counts and the hand Jeremy Dhondy

RON Webb by e-mail says: We are a opposite failed to force to game on a 14

successful ‘early learners’ club of count, then I would view this to be

twelve years standing. Each year evidence of an undisclosed agreement.

brings students from the local Adult I suspect that, in truth, if the beginners the answer is: ‘No, I don’t,’ usually delivered

bridge. In that time we have pairs that ticularly damaged, but it probably is spoil- indicating that the person questioned hasn’t

have become good club players and a ing their game to some extent, and that’s revoked in living memory, then could there

few good players have joined us. not the way to get them to play more still be a problem?

However, we discourage the ‘county’ regularly and in a tougher game. The answer is ‘Yes’ and the problem arises

player as we stress the access to bridge Having said all that, I don’t think it is because some unauthorised information

for students. the route you want to take. If your game may be given as a result of this question. For

Generally we follow the laws and is aimed at learners who are moving on, example, if a player shows out very early in

EBU regulations but have banned then this type of behaviour is a good way the play and is asked the question, then

psychic opening bids because at one to put them off. Are these pairs so des- perhaps he might conclude that his partner

stage we had an experienced pair perate to win against players who presu- is rather surprised. Now, of course, it is a

come in to the club and start ‘taking mably are weaker than them, that any clear breach to ask the question in anything

the mickey’ with beginners. tactics will do? other than a neutral voice. Assuming

number that ‘take advantage’ of the a quiet word with them and say that the ask: ‘No hearts, partner?’ but you haven’t

inexperience of players. They open very game is intended for learners moving on, asked on any of the previous ten hands

light and frequently overcall on poor that they are welcome to play but that where partner has shown out, this will

four-card suits, and in general are using they need to curb their instinct to take indicate to partner that you have some

of the rest of the players. in a way likely to confuse and upset. If authorised to him, i.e. he may not base his

Usually, such bidding will not be they don’t take the hint, or argue that it defence on partner’s surprise by concluding

master sheets, therefore ‘in the bar they like, then I think you should ask them the suit as might have been suspected. If you

discussion’ after the game this is not to come again. now conclude that you will defend

coming to light. What do you think assuming that declarer has an undisclosed

situation? Julian Pottage of Porthcawl asks via e- ‘no hearts’ question, then this is an example

mail: What, if any, are the implica- of basing your defence on unauthorised

tions of asking ‘having none, partner’ information.

AS a club you can set which regulations as a defender in the new laws? Law 16B covers what the director may

you wish so that you can say, perfectly do in such circumstances. In practice, I

legitimately, that a strong club, a forcing suspect that it will be quite hard to take

pass or a Multi are not permitted. If these THE right to ask this question of your advantage in such positions even if one

pairs habitually open light and it did not partner was restored this year in Law 61B wanted to; however, in order to avoid this

accord with what their convention card and covered in the August article but is perhaps you should always ask, or alter-

said (or, if they didn’t have one for a club asking this question likely to cause any natively never ask. I have resolved, per-

evening, what the TD viewed their agree- problem? If the answer is: ‘Oh dear, I have sonally, not to ask because I don’t think I

ments to be) then I would consider it to be got one!’ and a card of the suit is now will remember to do it consistently having

an undisclosed agreement and warn them produced, then a revoke is avoided but the been out of the habit for about twenty

that if it continued they would be subject director must be called as there will be a years and because, on the whole, my

to penalty. For example, if they opened on major penalty card on the table. However if partners rarely revoke!