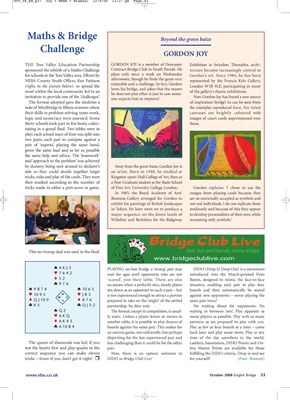 Maths & Bridge Beyond the green baize

sponsored the rebirth of a Maths Challenge Contract Bridge Club in South Parade. He tecture became increasingly central to

for schools in the Tees Valley area. Efforts by plays only once a week on Wednesday Gordon’s art. Since 1984, he has been

enjoyable and a challenge. In fact, Gordon

(right, in the picture below), to spread the London W1R 9LE, participating in many

loves his bridge, and jokes that the reason

word within the local community led to an of the gallery’s theme exhibitions.

he does not play often is just in case some-

invitation to provide one of the ‘challenges’. one expects him to improve! Now Gordon Joy has found a new source

The format adopted gave the students a of inspiration: bridge! As can be seen from

taste of MiniBridge in fifteen minutes where the examples reproduced here, his latest

their skills in problem solving, team-work, canvases are brightly coloured with

logic and numeracy were assessed. Some images of court cards superimposed over

nating in a grand final. Two tables were in

play; each school team of four was split into

two pairs, each pair to compete against a

given the same lead and as far as possible

the same help and advice. The ‘teamwork’

and ‘approach to the problem’ was achieved

by dummy being sent around to declarer’s Away from the green baize, Gordon Joy is

side so they could decide together target an artist. Born in 1948, he studied at

tricks, risks and play of the cards. They were Kingston-upon-Hull College of Art, then as

tricks made in either a part-score or game. of Fine Art, University College London. Gordon explains: ‘I chose to use the

In 1985, the Royal Academy of Arts’ images from playing cards because they

exhibit his paintings of British landscapes not real individuals. I do not replicate them

in Tokyo. He later went on to produce a studiously and because of this they appear

Wiltshire and Berkshire for the Ridgeway remaining only symbols.’

This no-trump deal was used in the final:

♦ 52 ‘scared’, join their table. There are also Room, designed to mimic the face-to-face

♣ K5 ♣ QJ32 partnership. So, they wait. No waiting about for opponents. No

♠ Q2 The format, except in competition, is usual- waiting in between ‘sets’. Play opposite as

♥ AKQ ly static. Unless a player leaves or moves to many players as possible. Play with as many

♦ AK43 another table, it is possible to play dozens of partners as are prepared to play with you.

an uneven game, not unfriendly, but perhaps back later and play some more. Play at any

dispiriting for the less experienced pair and time of the day anywhere in the world.

The queen of diamonds was led; if you less challenging than it could be for the other Ladders, barometers, DIDO Points and On-

test the hearts first and play spades in the pair. line Master Points are available for those

correct sequence you can make eleven Now, there is an option: welcome to fulfilling the DIDO criteria. Drop in and see

tricks – fewer if you don’t get it right! DIDO in Bridge Club Live! for yourself! (Fran Bramzel)