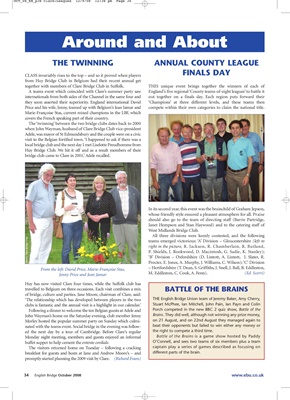 from Huy Bridge Club in Belgium had their recent annual get

together with members of Clare Bridge Club in Suffolk. THIS unique event brings together the winners of each of

internationals from both sides of the Channel in the same four and out together on a finals day. Each region puts forward their

they soon asserted their superiority. England international David ‘Champions’ at three different levels, and these teams then

Price and his wife, Jenny, teamed up with Belgium’s Jean Jamar and compete within their own categories to claim the national title.

Marie-Françoise Stas, current mixed champions in the LBF, which

covers the French speaking part of their country.

The ‘twinning’ between the two bridge clubs dates back to 2000

Adele, was mayor of St Edmundsbury and the couple were on a civic

visit to the Belgian fortified town. ‘I happened to ask if there was a

Huy Bridge Club. We hit it off and as a result members of their

In its second year, this event was the brainchild of Graham Jepson,

whose friendly style ensured a pleasant atmosphere for all. Praise

should also go to the team of directing staff (Barrie Partridge,

Janet Hempson and Stan Haywood) and to the catering staff of

All three divisions were keenly contested, and the following

Huy has now visited Clare four times, while the Suffolk club has

travelled to Belgium on three occasions. Each visit combines a mix BATTLE OF THE BRAINS

‘The relationship which has developed between players in the two THE English Bridge Union team of Jeremy Baker, Amy Cherry,

clubs is fantastic and the annual visit is a highlight in our calendar.’ Stuart McPhee, Ian Mitchell, John Pain, Ian Payn and Colin

Following a dinner to welcome the ten Belgian guests at Adele and Porch competed in the new BBC 2 quiz show, Battle of the

John Wayman’s home on the Saturday evening, club member Jenny Brains. They did well, although not winning any prize money,

Morley hosted the popular summer party on Sunday which culmi- on 21 August, and on 22nd August they managed again to

nated with the teams event. Social bridge in the evening was follow- beat their opponents but failed to win either any money or

ed the next day by a tour of Cambridge. Before Clare’s regular the right to compete a third time.

Monday night meeting, members and guests enjoyed an informal Battle of the Brains is a game show hosted by Paddy

buffet supper to help cement the entente cordiale. O’Connell, and sees two teams of six members plus a team

breakfast for guests and hosts at Jane and Andrew Moore’s – and different parts of the brain.