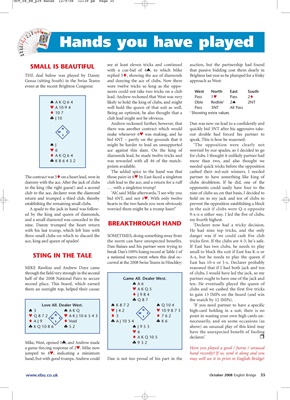 Hands you have played

see at least eleven tricks and continued auction, but the partnership had found

SMALL IS BEAUTIFUL with a cue-bid of 4♠, to which Mike that passive bidding cost them dearly in

THE deal below was played by Danny replied 5♦, showing the ace of diamonds Brighton last year so he plumped for a frisky

Gesua (sitting South) in the Swiss Teams and denying the ace of clubs. Now there approach as West:

event at the recent Brighton Congress: were twelve tricks so long as the oppo-

Andrew reckoned further, however, that Dan was now on lead to a confidently and

S make whenever 6♥ was making, and he out double had forced his partner to

bid 6NT – partly on the grounds that it speak. This is how he reasoned:

♥ 6 ace against this slam. On the king of worried by our spades, so I decided to go

♦ AKQ64 diamonds lead, he made twelve tricks and for clubs. I thought it unlikely partner had

The added spice to the hand was that cashed their red-suit winners. I needed

The contract was 5♦ on a heart lead, won in those pairs in 6♥ by East faced a singleton partner to have something like king of

dummy with the ace. After the jack of clubs club lead to the ace, and a return for a ruff clubs doubleton. If he did, one of the

to the king (the right guess!) and a second . . . with a singleton trump! opponents could easily have four to the

club to the ace, declarer won the diamond ‘Ah’, said Mike afterwards, ‘I see why you nine of clubs so, on that basis, I decided to

return and trumped a third club, thereby bid 6NT, and not 6♥. With only twelve hold on to my jack and ten of clubs to

establishing the remaining small clubs. hearts in the two hands you were obviously prevent the opposition establishing a block

A spade to the jack in hand was follow- worried there might be a trump loser!’ in the suit if clubs were Q-x opposite

ed by the king and queen of diamonds, 9-x-x-x either way. I led the five of clubs,

and a small diamond was conceded to the my fourth highest.

with his last trump, which left him with He had nine top tricks, and the only

three small clubs on which to discard the SOMETIMES, doing something away from danger was if we could cash five club

ace, king and queen of spades! the norm can have unexpected benefits. tricks first. If the clubs are 4-3, he's safe.

Dan Baines and his partner were trying to If East has two clubs, he needs to play

STING IN THE TALE a national teams event when this deal oc- A-x, but he needs to play the queen if

curred at the 2008 Swiss Teams in Hinckley: East has 10-x or J-x. Declarer probably

through the field very strongly in the second of clubs, I would have led the jack, so my

half of the 2008 National Pairs to secure Game All. Dealer West. partner ought to have one of the jack and

second place. This board, which earned ♠A6 ten. He eventually played the queen of

them an outright top, helped their cause: ♥AKQ5 clubs and we cashed the first five tricks

♥6 have the unexpected benefit of fooling

a game-forcing response of 2♥. Mike now Have you played a good / funny / unusual

jumped to 4♥, indicating a minimum hand recently? If so, send it along and you

hand, but with good trumps. Andrew could Dan is not too proud of his part in the may well see it in print in English Bridge!