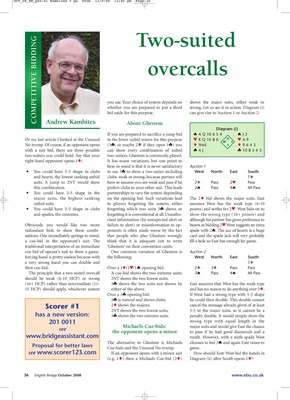 you use. Your choice of system depends on shows the major suits, either weak or

whether you are prepared to put a third strong. Let us see it in action. Diagram (i)

bid aside for this purpose. can give rise to Auction 1 or Auction 2:

right-hand opponent opens 1♦: It has many variations, but one point to

bear in mind is that it is never satisfactory Auction 1

and hearts, the lowest ranking unbid clubs, weak or strong, because partner will 1♦

suits. A jump to 2NT would show have to assume you are weak and pass if he 2♦ Pass 2♥ Pass

this combination. prefers clubs to your other suit. This leads 2♠ Pass 4♠ All Pass

major suits, the highest ranking on the opening bid. Such variations lead The 2♦ bid shows the major suits. East

unbid suits. to players forgetting the system, either assumes West has the weak type (6-10

• You could have 5-5 shape in clubs forgetting which two suits 3♣ shows or points) and settles for 2♥. West bids on to

and spades, the extremes. forgetting it is conventional at all. Unautho- show the strong type (16+ points) and

redundant bids to show these combi- ponents is often made worse by the fact spade with 2♠. The ace of hearts is a huge

nations. One immediately springs to mind, that people who play Ghestem wrongly card and the spade jack will very probably

a cue-bid in the opponent’s suit. The think that it is adequate just to write fill a hole so East has enough for game.

traditional interpretation of an immediate ‘Ghestem’ on their convention cards.

forcing hand is pretty useless because with the following: West North East South

a very strong hand you can double and 1♦

The principle that a two-suited overcall A cue-bid shows the two extreme suits; 3♠ Pass 4♠ All Pass

should be weak (6-10 HCP) or strong 2NT shows the two lowest suits;

15 HCP) should apply, whichever system either of the above. and has no reason to do anything over 3♦.

2♣ is natural and shows clubs; he could then double. This double cannot

Scorer #1 2♦ shows the majors; cancel the message already given of at least

2NT shows the two lowest suits; 5-5 in the major suits, so it cannot be a

has a new version: 3♣ shows the two extreme suits. penalty double. It would simply show the

Michaels Cue-bids: major suits and would give East the chance

www.bridgeassistant.com misfit. However, with a sixth spade West

Proposal for better laws Cue-bids and the Unusual No-trump. game.

see www.scorer123.com If an opponent opens with a minor suit How should East-West bid the hands in