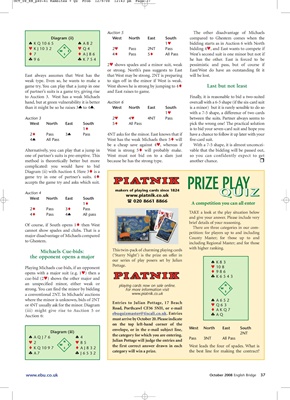 Auction 5 The other disadvantage of Michaels

2♥ shows spades and a minor suit, weak pessimistic and pass, but of course if

or strong. North’s pass suggests to East East/West do have an outstanding fit it

East always assumes that West has the that West may be strong. 2NT is preparing will be lost.

weak type. Even so, he wants to make a to sign off in the minor if West is weak.

game try. You can play that a jump in one West shows he is strong by jumping to 4♦ Last but not least

of partner’s suits is a game try, giving rise and East raises to game.

to Auction 3. West has a weak Michaels Finally, it is reasonable to bid a two-suited

hand, but at green vulnerability it is better Auction 6 overcall with a 6-5 shape (if the six-card suit

than it might be so he raises 3♠ to 4♠. West North East South is a minor) but it is rarely sensible to do so

Auction 3 2♥ 4♥ 4NT Pass between the suits. Partner always seems to

West North East South 5♦ All Pass pick the wrong one! The practical solution

1♦ is to bid your seven-card suit and hope you

2♦ Pass 3♠ Pass 4NT asks for the minor. East knows that if have a chance to follow it up later with your

4♠ All Pass West has the weak Michaels then 5♦ will five-card suit.

be a cheap save against 4♥, whereas if With a 7-5 shape, it is almost unconcei-

Alternatively, you can play that a jump in West is strong 5♦ will probably make. vable that the bidding will be passed out,

one of partner’s suits is pre-emptive. This West must not bid on to a slam just so you can confidently expect to get

method is theoretically better but more because he has the strong type. another chance.

complicated: you would have to bid

game try in one of partner’s suits. 4♦

accepts the game try and asks which suit.

TAKE a look at the play situation below

and give your answer. Please include very

brief details of your reasoning.

Of course, if South opens 1♦ then West

There are three categories in our com-

cannot show spades and clubs. That is a

petition: for players up to and including

major disadvantage of Michaels compared County Master; for those up to and

to Ghestem. including Regional Master; and for those

This twin-pack of charming playing cards with higher ranking.

our series of play posers set by Julian ♠ K83

Playing Michaels cue-bids, if an opponent

an unspecified minor, either weak or playing cards now on sale online. N

strong. You can find the minor by bidding W E

or 4NT usually ask for the minor. Diagram ♥ Q63

must arrive by October 20. Please indicate

on the top left-hand corner of the

the category for which you are entering.

N Julian Pottage will judge the entries and

the first correct answer drawn in each West leads the four of spades. What is

category will win a prize. the best line for making the contract?