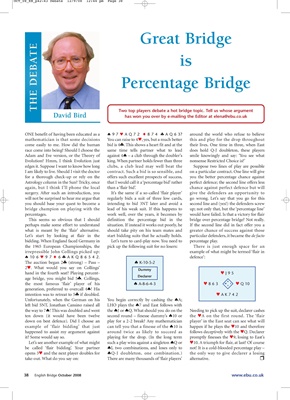 David Bird has won you over by e-mailing the Editor at elena@ebu.co.uk

mathematician is that some decisions You can raise to 4♥, yes, but a much better this and play for the drop throughout

come easily to me. How did the human bid is 4♣. This shows a heart fit and at the their lives. One time in three, when East

race come into being? Should I choose the same time tells partner what to lead does hold Q-J doubleton, these players

Adam and Eve version, or the Theory of against 4♠ – a club through the doubler’s smile knowingly and say: ‘You see what

edges it. Suppose I want to know how long clubs, a club lead may well beat the Suppose two lines of play are possible

I am likely to live. Should I visit the doctor contract. Such a bid is so sensible, and on a particular contract. One line will give

for a thorough check-up or rely on the offers such excellent prospects of success, you the better percentage chance against

Astrology column in the Sun? Tricky, once that I would call it a ‘percentage bid’ rather perfect defence; the second line offers less

again, but I think I’ll phone the local than a ‘flair bid’. chance against perfect defence but will

surgery. After such an introduction, you It’s the same if a so-called ‘flair player’ give the defenders an opportunity to

will not be surprised to hear me argue that regularly bids a suit of three low cards, go wrong. Let’s say that you go for this

you should base your quest to become a intending to bid 3NT later and avoid a second line and (yes!) the defenders screw

bridge champion on playing with the lead of his weak suit. If this happens to up; not only that, but the ‘percentage line’

percentages. work well, over the years, it becomes by would have failed. Is that a victory for flair

This seems so obvious that I should definition the percentage bid in the bridge over percentage bridge? Not really.

perhaps make some effort to understand situation. If instead it works out poorly, he If the second line did in fact offer you a

what is meant by the ‘flair’ alternative. should take pity on his team mates and greater chance of success against those

Let’s start by looking at flair in the start bidding suits that he actually holds. particular defenders, it became the de facto

bidding. When England faced Germany in Let’s turn to card-play now. You need to percentage play.

the 1965 European Championships, the pick up the following suit for no losers: There is just enough space for an

irrepressible John Collings picked up: example of what might be termed ‘flair in

2♥. What would you say on Collings’ Dummy

generation, preferred to overcall 4♠! His

Unfortunately, when the German on his You begin correctly by cashing the ♠A;

the way to 7♠! This was doubled and went the ♠J or ♠Q. What should you do on the Needing to pick up the suit, declarer cashes

ten down (it would have been twelve second round – finesse dummy’s ♠10 or the ♥ A on the first round. The ‘flair

down on best defence). Did I choose an play for a 2-2 break? Any mathematician player’ in the East seat can see what will

happened to assist my argument against around twice as likely to succeed as follows deceptively with the ♥Q. Declarer

it? Some would say so. playing for the drop. (In the long term promptly finesses the ♥9, losing to East’s

Let’s see another example of what might such a play wins against a singleton ♠Q or ♥10. A triumph for flair, at last? Of course

be called ‘flair bidding’. Your partner ♠J, two combinations, and loses only to not! It is a cold-blooded percentage play –

opens 3♥ and the next player doubles for ♠ Q-J doubleton, one combination.) the only way to give declarer a losing

take-out. What do you say on: There are many thousands of ‘flair players’ alternative.