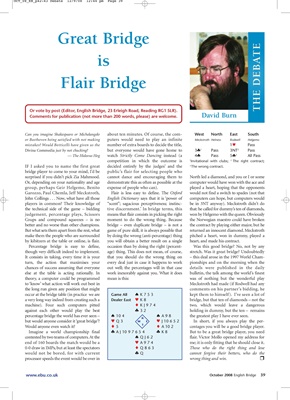 Comments for publication (not more than 200 words, please) are welcome. David Burn

Can you imagine Shakespeare or Michelangelo about ten minutes. Of course, the com- West North East South

mistakes? Would Botticelli have given us the number of extra boards to decide the title, 1♥ Pass

Divina Commedia just by not chucking? but everyone would have gone home to 3♣ 1 Pass 3NT2 Pass

competition in which the outcome is Invitational with clubs;

bridge player to come to your mind, I’d be public’s flair for selecting people who

surprised if you didn’t pick Zia Mahmood. cannot dance and encouraging them to North led a diamond, and you or I or some

Or, depending on your nationality and age demonstrate this as often as possible at the computer would have won with the ace and

group, perhaps Geir Helgemo, Benito expense of people who can). played a heart, hoping that the opponents

Garozzo, Paul Chemla, Jeff Meckstroth, Flair is less easy to define. The Oxford would not find a switch to spades (not that

John Collings . . . Now, what have all those English Dictionary says that it is ‘power of computers can hope, but computers would

players in common? Their knowledge of “scent”; sagacious perceptiveness; instinc- be in 3NT anyway). Meckstroth didn’t do

the technical side of the game – bidding tive discernment.’ In bridge terms, this that: he called for dummy’s ten of diamonds,

judgement, percentage plays, Scissors means that flair consists in picking the right won by Helgemo with the queen. Obviously

Coups and compound squeezes – is no moment to do the wrong thing. Because the Norwegian maestro could have broken

better and no worse than other champions. bridge – even duplicate bridge – is not a the contract by playing either major, but he

But what sets them apart from the rest, what game of pure skill, it is always possible that returned an innocent diamond. Meckstroth

make them the people who are surrounded by doing the wrong (anti-percentage) thing pitched a heart, won in dummy, played a

by kibitzers at the table or online, is flair. you will obtain a better result on a single heart, and made his contract.

Percentage bridge is easy to define, occasion than by doing the right (percent- Was this good bridge? No, not by any

though very difficult indeed to implement. age) thing. This does not mean, of course, stretch. Was it great bridge? Undoubtedly

It consists in taking, every time it is your that you should do the wrong thing on – this deal arose in the 1997 World Cham-

turn, the action that maximises your every deal just in case it happens to work pionships and on the morning when the

chances of success assuming that everyone out well; the percentages will in that case details were published in the daily

else at the table is acting rationally. In work inexorably against you. What it does bulletin, the talk among the world’s finest

theory, a computer could be programmed mean is this: was of nothing but the wonderful play

the long run given any position that might comments on his partner’s bidding, he

occur at the bridge table (in practice we are Game All ♠ K753 kept them to himself ). I’ve seen a lot of

a very long way indeed from creating such a Dealer East ♥ K8 bridge, but that ten of diamonds – not the

machine). Four such computers pitted ♦ KJ974 two, which would leave a dangerous

against each other would play the best ♣ 32 holding in dummy, but the ten – remains

♠ A98 the greatest play I have ever seen.

contested by two teams of computers. At the ♠QJ62 flair. Victor Mollo opened my address for

0-0 draw in IMPs, but at least the spectators ♦Q863 Those who do the right thing and lose

would not be bored, for with current ♣Q cannot forgive their betters, who do the

processor speeds the event would be over in wrong thing and win.