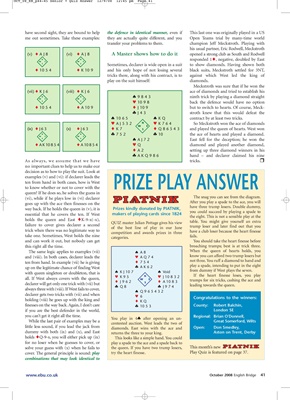 have second sight, they are bound to help the defence in identical manner, even if This last one was originally played in a US

me out sometimes. Take these examples: they are actually quite different, and you Open Teams trial by many-time world

transfer your problems to them. champion Jeff Meckstroth. Playing with

Sometimes, declarer is wide open in a suit to show diamonds. Having shown both

tricks there, along with his contract, is to against which West led the king of

play on the suit himself: diamonds.

Meckstroth was sure that if he won the

♣ J43 stroth knew that this would defeat the

♥ K764 So Meckstroth won the ace of diamonds

♠ AJ72 East fell for the deception; he won the

♦ A2 setting up three diamond winners in his

As always, we assume that we have tricks.

no important clues to help us to make our

decision as to how to play the suit. Look at

examples (v) and (vi): if declarer leads the

ten from hand in both cases, how is West

to know whether or not to cover with the

queen? If he does so, he solves the guess in

(vi), while if he plays low in (vi) declarer The snag you can see from the diagram.

goes up with the ace then finesses on the After you play a spade to the ace, you will

you could succeed by playing a spade to

essential that he covers the ten. If West makers of playing cards since 1824

the eight. This is not a sensible play at the

holds the queen and East ♦K-9-x(-x), table. You might give yourself an extra

of the best line of play in our June

and can work it out, but nobody can get You should take the heart finesse before

this right all the time. broaching trumps; best is at trick three.

The same logic applies to examples (vii) ♠ A8 When the queen of hearts holds, you

and (viii). In both cases, declarer leads the ♥ AQ74 know you can afford two trump losers but

ten from hand. In example (vii) he is giving ♦ 754 not three. You ruff a diamond to hand and

♣ AK62 play a spade, intending to put in the eight

up on the legitimate chance of finding West

with queen singleton or doubleton, that is If the heart finesse loses, you play

all. If West always covers with the queen, W E

trumps for six tricks, cashing the ace and

declarer will get only one trick with (vii) but leading towards the queen.

declarer gets two tricks with (vii) and when ♥ 6

holding (viii) he goes up with the king and Congratulations to the winners:

if you are the best defender in the world, London SE

you can’t get it right all the time. Regional: Brian O'Donnell,

You play in 4♠ after opening an un-

While the last pair of examples may be a contested auction. West leads the two of Great Somerford, Wilts

little less sound, if you lead the jack from diamonds. East wins with the ace and Open: Don Smedley,

dummy with both (ix) and (x), and East returns the three to your king. Aston on Trent, Derby

holds ♦Q-9-x, you will either pick up (ix) This looks like a simple hand. You could

for no loser when he guesses to cover, or play a spade to the ace and a spade back to

solve your guess with (x) when he fails to the queen. If you have two trump losers, This month’s new

combinations that may look identical to