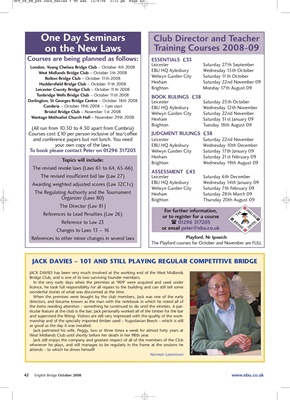 Courses are being planned as follows: ESSENTIALS £33

and conference papers but not lunch. You need Leicester Saturday 22nd November

your own copy of the laws. EBU HQ Aylesbury Wednesday 10th December

The Regulating Authority and the Tournament Hexham Saturday 28th March 09

The Playford courses for October and November are FULL

Bridge Club, and is one of its two surviving founder members.

licence, he took full responsibility for all repairs to the building and can still tell some

wonderful stories of what was discovered at the time.

When the premises were bought by the club members, Jack was one of the early

directors, and became known as the man with the notebook in which he noted all of

the items needing attention – something he continued to do until the nineties. A par-

ticular feature at the club is the bar; Jack personally worked all of the timber for the bar

and supervised the fitting. Visitors are still very impressed with the quality of the work-

as good as the day it was installed.

Jack partnered his wife, Peggy, two or three times a week for almost forty years at

West Midlands Club until shortly before her death in her 98th year.

whenever he plays, and still manages to be regularly in the frame at the sessions he

attends – to which he drives himself!