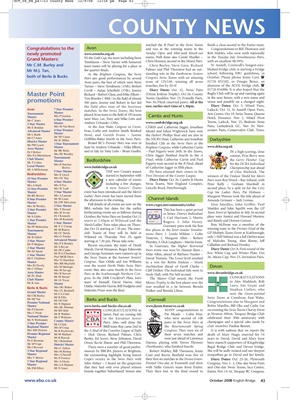 reached the B Final in the Swiss Teams finish a close second to the Exeter team.

IN the Gold Cup, the team including Steve teams. Well done also Carole Mueller – in the Tuesday July Simultaneous Pairs,

Grand Masters: Chris Mooney, second in the Mixed Pairs. with an excellent 68.59%.

Mr M.J. Tan, the quarter-finals. Palmer and Phil Thornton had an out- blished bridge club, is starting a bridge

At the Brighton Congress, the Swiss standing win in the Eastbourne Seniors school, following EBU guidelines, in

Rugby Club will be up and running again

in the near future, with a new name and

Tim Brierley ( 49th ) in the field of almost

promotions 500 pairs. Jeremy and Robert in fact led Nov 30, Flitch (married pairs). All at the venue and possibly on a changed night.

third, and Gareth Evans – Janine the Hubert Phillips final and are also in

Mr PR Wells and in July by Tony Letts – Brian Goalby. – Paul Fegarty were 26th. In the Teams, IN a high-scoring, close

Ms T Cottee Fegarty were second in the B Final, ahead

Mrs B Sinclair- for the DCBA Individual

Brown of Catherine Jagger in fifth place. Championship just ahead

5 Star Master THE new County season Ely have retained their crown in the of Clive Warbrick. The

Bedfordshire Mrs E Lloyd started in September with First Division of the County League. winners of the Dodson Shield for Men’s

Master 3 Star Master event has been introduced and the Men’s/ Cup for Ladies Pairs, Pat Hobson –

Master Mrs JF Irvine forthcoming events are as follows: during in Jersey. District Individual: Team Event at Spondon in July. In second

1 Star Premier starts at 2.00pm at Wilstead and the and Randy and Doreen Curzon.

Tournament Mr M Ramzy day Oct 23 starting at 7.30 pm. The inter- five places in the Inter-insular Simulta- winning team in the Premier Final of the

Mr B Gillett Mrs G Trinder Wilstead on Thursday Nov 20, again only 1 IMP behind was a full Derbys team

2 Star Master Mr A Bevan In Guernsey, the Higher Restricted

Congress. Alan Oddie and Jon Williams in a win for Robin Endean – Marie

Pairs at the Scarborough Northern Con- Andy Hall, with Pat Self second.

Mr K Jani team of himself, David Harris, Alan Money Trophy, to the best player over the to Alex Maddock, Rob

3 Star Premier Pairs. Also, well done the pairs in the Swiss Pairs at champagne and a special cake made by

Mrs SM Dickens Mr R Kozlowski the A final of the Counties League of Eight Congress. They won six of It is with sadness that we report the

Master Mr R Razzak were just ahead of Lawrence years to David. David and Mary have

Master Mrs J Chisnall the outstanding highlight being Simon Cant and Barrie Benfield won five of sympathies go to David and her family.

Ms EM Ellery Mr N Jones that they had only ever played sixteen with Sallie Green’s team from Exeter. and One-day Swiss Teams, Isca Centre,

boards together beforehand! Simon also They then lost in the final round to Exeter. Nov 14-16, Torquay BC Congress.