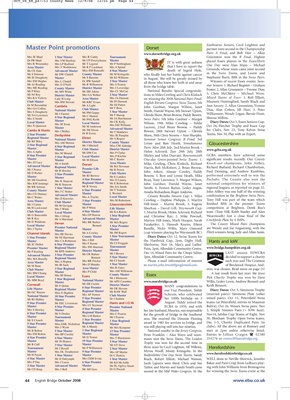 Master Point promotions Dorset partner were second in the Championship

all those who knew her both at and away

Master L Woolard Amalia Richardson, Roger Andrews. John Atthey was one half of the winning

Mrs D Knowles Tony Hill was part of the team which

A last result from last year: the Joyce

Master Mrs J Wyatt Mr A Mundy Mr MA Kempster was still playing well into her nineties. clubs). All the above are at Romsey and

second in the Mid Wales Congress. In the for winning the Swiss Teams event at the