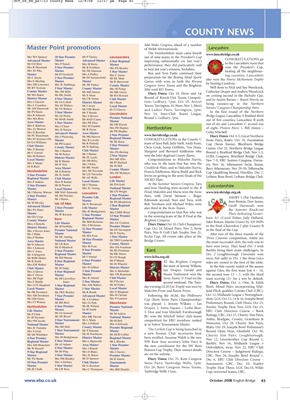 Mid-Wales Congress, ahead of a number

performance; they did particularly well

1 Star Master beating all the neighbour-

Master Mr R Sherwood Games with wins in both the Riviera

Mr RA Howard on coming second in the Pachabo Cup,

and to Austin Barnes – Stuart Norris on

Mrs L Coombes being runners-up in the Northern

Master out of five counties, Lancashire B sixth

Area Master the most successful club, the only one to

sides are rooted to the foot of the table.

The Corbett Cup is being launched in

the new coordinator for the SW Kent Oxfordshire, away. Nov 22, EBU Club