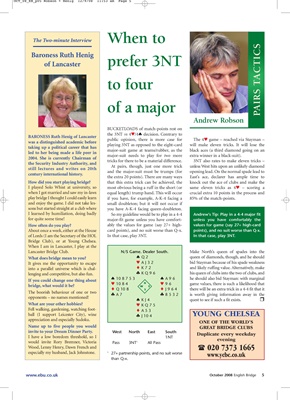 The Two-minute Interview When to

BUCKETLOADS of match-points rest on

public opinion, there is more case for The 4♥ game – reached via Stayman –

was a distinguished academic before

playing 3NT as opposed to the eight-card will make eleven tricks. It will lose the

taking up a political career that has

major-suit game at teams/rubber, as the black aces (a third diamond going on an

led to her being made a life peer in

major-suit needs to play for two more extra winner in a black-suit).

2004. She is currently Chairman of

tricks for there to be a material difference. 3NT also rates to make eleven tricks –

the Security Industry Authority, and

At pairs, though, just one more trick unless West hits upon an unlikely diamond

still lectures and writes on 20th

and the major-suit must be trumps (for opening lead. On the normal spade lead to

the extra 20 points). There are many ways East’s ace, declarer has ample time to

How did you start playing bridge? that this extra trick can be achieved, the knock out the ace of clubs and make the

I played Solo Whist at university, so most obvious being a ruff in the short (or same eleven tricks as 4♥ – scoring a

when I got married and saw my in-laws equal length) trump hand. This will occur crucial extra 10 points in the process and

play bridge I thought I could easily learn if you have, for example, A-K-4 facing a 85% of the match-points.

and enjoy the game. I did not take les- small doubleton; but it will not occur if

sons but started straight at a club where you have A-K-4 facing queen-doubleton.

I learned by humiliation, doing badly So my guideline would be to play in a 4-4 Andrew’s Tip: Play in a 4-4 major fit

Bridge Club), or at Young Chelsea.

When I am in Lancaster, I play at the

What does bridge mean to you? ♠Q2 queen of diamonds, though, and he should

into a parallel universe which is chal- ♦K72 and likely ruffing value. Alternatively, make

lenging and competitive, but also fun. ♣KQ96 his queen of clubs into the two of clubs, and

♥96 game values, there is such a likelihood that

The boorish behaviour of one or two

♠KJ4 quest to see if such a fit exists.

What are your other hobbies? ♥KQ75

ONE OF THE WORLD’S

Name up to five people you would GREAT BRIDGE CLUBS

I have a low boredom threshold, so I 1NT

27+ partnership points, and no suit worse