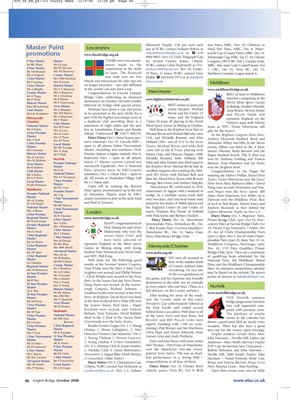 no longer necessary – any club affiliated

Ms A Murphy Mr G Y Burgoyne to the county can now have a rep. www.middlesexbridge.co.uk

Bridge Club, celebrating its diamond members competing in the

Mr LK Hazlehurst Mrs KN Harries to be presented at the next AGM, for a Byrne and his Under-21 and Nicola Smith will

Mr A Shackman pair with the highest percentage score at team, and the England

Merseyside/ represent England on the

1 Star Premier entry essential). Oct 19, Lincoln IMP – Holland 19th= out of 474. In the Swiss Alexander Allfrey was fifth. In the Teams

Master open to all players below Tournament Teams, Michael Byrne and Mike Bell events, Allfrey was third in the A final.

Mr S O’Brien all. All events at Dunholme Village Hall then the Mixed Pivot Teams with Bryony Teams. Victor Silverstone won the Essex/

Mr PC Cotes Clubs will be running the Bainton Manchester BC celebrated its 30th Wing were second; Silverstone and Was-

3 Star Tournament county members to play in the semi-final over two days, club and local teams were Harouni won the Middlesex Plate. Best

Dr UM Hegde and final in January. joined by two teams of Welsh players and of luck to Neil Rosen, Martin Jones and

1 Star Regional and NPC Phil King. of qualifying heats scheduled for the

Master Mr JP Bradley WE were all stunned to

Dr I Budden hear of the sudden death

County Master results: at the Summer Seniors Congress, Pairs, and the Middlesex Championship

Armstrong. He was one

16 Star Premier Leighton was second, and Philip Watson may be found on the website. Do report

Mr A Geschke of the true gentlemen of

Master – Chris Wright were second in the Swiss points of interest to hsbakhshi@aol.com.

Mrs A Hallett the game, and his expertise and friendly

Prof A Young demeanour at the table was an example

Master to every player who met him. (There is a Norfolk

Mrs DM Hill Pairs. At Brighton, David Ewart was third After leading for most of the week-

in the first weekend Pairs; Mike Hill won end, the County team in this year’s

Area Master bridge programme has been

Master Erichsen were second, and Andrew the final hurdle and ended second

third in the A final of the Teams; Peter of the team: Dave and Jean Keen, Ted

Master Mr MN Gore events in the calendar has

Czerniewski won the Swiss Teams. Reveley and Bill Niccol (who were

2 Star Premier occasion. There has also been a good

turn-out for the county open evenings.

Advanced Master Mr I Chacksfield congratulations to all four of them.