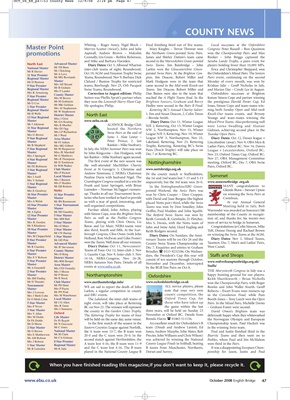 won the Championship Pairs and Max

and Mike and Barbara Harnden. second in the Warwickshire Green-pointed Sandra Landy Trophy, a pairs event for

Mr D Benison Master Cleland / Buxton Trophy for restricted Mark Hodgson were in the team that Monday of every month, was won by

Mrs K Armstrong Correction to August edition: Philip Dan Baines were also in the team that Oxfordshire successes at Brighton

5 Star Premier Sutton was Phyllis Spratt’s partner when reached the A Flight Teams final. In the feature Simon Cope and partner winning

Mr MK Guillain My apologies, Philip. Hedley were second in the Pairs B Final. Jones, Simon Cope and team-mates win-

Mrs LP Richardson Swiss Pairs at the end of

Cramlington Congress resulted in a win for respectively, but the 3rd team won 20-0. www.somersetbridge .org.uk

Master Mr EB Roberts Frank and Janet Springett, with Brian In the Nottinghamshire/EBU Green- MANY congratulations to

16 Star Premier 11 Star Premier up. Thanks to all our Tournament Secre- won by Chris Cooper – Dave Cropper, on winning the Swiss Pairs at

Master Master taries who have worked so hard to provide with David and Joan Burgess (the highest Cwmbran.

Mrs A Welsh Mr BS Rasmussen us with a year of good, interesting, and At our Annual General

12 Star Premier 5 Star Master with Simon Cope, won the Brighton Swiss The Retford Swiss Teams was won by membership of the County in recogni-

Master Mrs MH Ball Pairs as well as the Peebles Congress Keith Cornish, R. Gembicki, D. Fletcher, tion of, and thanks for, his twenty-two

borough Congress, Clive Owen (with John Diary Dates: On Sundays, the Anni- on winning the Swiss Teams at the AGM.

Holland, Ron McEwan and Giles Foster) versary Teams will be on Oct 26 and the Diary Dates: Nov 1, Mixed Teams,

days, the President’s Cup this year will Staffs and Shrops

events at www.neba.co.uk. by the BGB Sim Pairs on Oct 8.

WE are sad to report the death of John Bowles and John Waller fourth. Geoff

Mr PN Pratt Larkin, a regular competitor in county note that your very own Roberts – Ewart Evans were runners-up

5 Star Master Mr J G Allen eight event, will take place at Kettering those who have taken up Pairs. In the Mixed Pairs, Michelle Davies

BC on Nov 23. The winners will represent – Graham Foster were second.

the county in the Garden Cities Trophy. three years, will be held on Sunday 23 David Owen’s Brighton team was

The Kettering Trophy for teams of four November at Oxford BC. Details from deliriously happy when they whitewashed

Mr D Morse Mr N Gascoyne In the first match of the season in the An excellent result for Oxfordshire’s B Championship team. Paul Hackett was

Mrs E Matthewson Mr M Clark 20-0 and the C team won 20-0. In the Procter, John Williams and Chris Wilson) Biarritz Teams and then went on to

second match against Hertfordshire, the was achieved by winning the National Peebles, where Paul and Jim McMahon

1 Star Master Regional Master A team lost 4-16, the B team won 11-9 County League Finals in Solihull, beating were third in the Pairs.

Mr B Lumsden Mr K Jalie and the C team lost 4-16. The B team B teams from Manchester, Northants, It was a disappointing European Cham-

played in the National County League B Dorset and Surrey. pionship for Jason, Justin and Paul