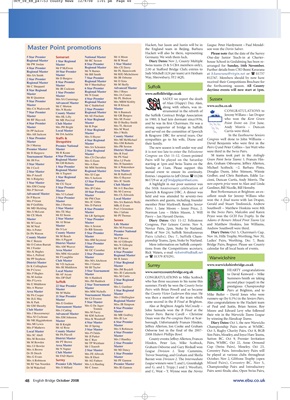 Hackett, but Jason and Justin will be in League. Peter Hardyment – Paul Mendel-

Hackett will also be there, representing Please note that the date of the Surrey

SADLY we report the death Sussex

Mrs CA Wadsworth Master along with others, was in-

Mr RF Haycock Mr ME Percival 6 Star Regional Mrs SE Foster in 1980. It had lain dormant since1936, who won the Kent Green

4 Star Premier Club Master Master Mr D Hedley-Smith and he was its first Chairman. He was a Point Event on 21st June.

strong supporter of bridge in Suffolk

Master Mrs J Wells and served on the committee of Ipswich

Master Mrs GM Roberts their family. David Benjamin who were first in the

Mr B Hargrave Mr R Keane it is not too late to enter the Felixstowe were third in the Swiss Pairs.

Mr A Ridgeley 861729 or at jeff bridgeplayer@aol.com. cioni, Duncan Curtis, Andy Morris. The

Master 1 Star Regional Pairs with Brian Powell and so became Pairs at Brighton, and to

Mr JLG May Master Mr CJ Everest runners-up (by 0.1%) in the Seniors Pairs.

5 Star Master Regional Master came second in the B Final at Brighton.

Also congratulations to the Hackett team

Mr FAD Harris Trevor Sweeting, and Graham and Sheila be played at various clubs throughout